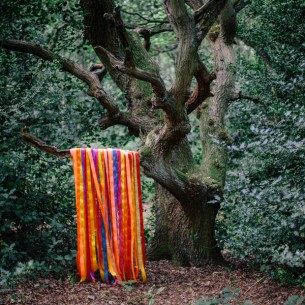 If you are anything like me, then you were waiting for this album like an orphan child at their first Christmas meal. “The Idiots Are Winning” (2006) and “The Inheritors” (2013) are two electronic albums that I continually go back to. This means a fuck ton when you listen to an album a day by the way. I’m not sure you realize but, holy fucking shit. In order to go back and listen to albums in full they have to be past smart and slick, they have to be more than just personal, they have to be something absolutely beyond, something I don’t quite understand. Something where if I listen to it a couple dozen times I still won’t understand all the elements involved. It’s got to have a hold on me that goes beyond my own understanding, as if the notes themselves are chiselling out new sections in my subconscious, and somehow, it feels fucking fantastic. Holden has done this for me. Now, let’s see if he can do it again.

This album has a fucking live band of Holden’s own choosing called, “The Animal Spirits”. What the fuck Holden? Did you get bored with the unstoppable world of electronic sounds already? From the get go, there’s an instant connection with early jam bands: you know the type – The 13th Floor Elevators, Blue Cheer, Neu!, Can, or the more modern, ever praised and lovely, Spiritualized – Well, what the fuck, right? There’s a fucking hippie blanket on the cover and it’s hanging off an old fucking tree! What did we really expect? Thriller? Best of Frank Sinatra?!

So take out those colourful bongs everyone and please, for your own sake, change that fucking water. Take whatever substances you find yourself enjoying these days. Then, find a nice bean bag chair or whatever the fuck you want to sit on/in.

You have yourself a new stoner album to listen to.

But this album does not try to copy the old format. Fuck no. It doesn’t have the fucking time. It’s James Holden doing what he does best behind a computer with mixers and shit, then we have that classic jam formula behind: Sax, drums, bass, guitar; part jazz, rock, and electronic. There are moments when the band hits a pace that reminds me of when Radiohead used to be on fucking point like in “Thunder Moon Gathering” (song 6). Ya motherfuckers. It’s one of those fucking albums. A full listener. A front to back motherfucker. The ones that aren’t supposed to be made anymore. Well, they are made. It has been made. It’s here. And guess what? Without being disrespectful, it takes a huge fucking dump on whatever you thought was your favourite jam band record. Like a steaming pile of kaleidoscopic curly soft serve ice cream poo, as if that little poo emoji took a lot of acid and was somehow real and talking to you about its last breakup with Kelly Clarkson. Not that Kelly Clarkson, the other one.

So ya, if some old stoner from the ’60s comes to your door and shows you some jam band records and says  “they just don’t make them like this anymore”, throw on this album then eat a lot of sprinkles. Like, a lot of sprinkles, just heaping spoon after heaping spoon. After this, eat all of their digestive cookies, they usually keep them in the cupboard above the fridge. Then, go back and take a kaleidoscopic and sparkly soft serve shit on top of their albums while wearing a tutu and a big smile. Music is moving forward. Time to jump on board. Choo-fucking-choo.