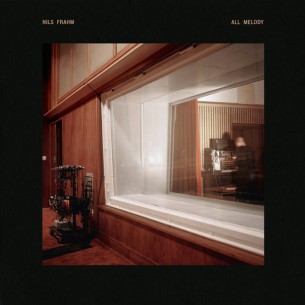 Some days I want my music to be atmospheric as shit. I just don’t have the energy. On the spectrum of bitchy white girl, I’m somewhere in between, “Whatever” and “I can’t even”. Those days where I don’t want to deal with words. I can’t cope with stories or emotions. I just want to put on a toque and that wonderful and international sign of, “fuck off” headphones, and just leave the world for a bit. If it says Nils Frahm on the cover then you’ve got the right album for the job.

Frahm is classical meets electronic, or electronic meets classical, all depending on whom you ask. He invented “Piano Day”, the 88th day of the year cause of the 88 keys on a piano (nerd!). On the second piano day, he, along with David Klavins, created a piano called “Modell 450” a successor of the two-story “Modell 370”. Just in case that went by too quickly for you, the guy makes pianos and then plays them. How fucking awesome is that? Even though he loves taking shit to the limit, the music he makes is so easily digestible you’d never think of him that way. His style is similar to Ólafur Arnalds and F.S. Blumm, with that Sigur Rós vibe and chill but with less focus on singing and more focus on electronics and instrumentation. If you want to go back in Frahm’s catalogue to listen I suggest, “Felt,” or, if you’re wanting to hear him live “Spaces”.

That picture on the cover is a picture of his new studio. Cool (I say ominously rubbing my hands together) Frahm gots more toys, boys. This album is his first I can recall that includes human vocals. The choir arrangement is simple and effective. I’m happy he didn’t get all giddy as a school girl on giggle juice and just record a thousand tracks of vocals. His recording choice on the acoustic piano is perfect. You can hear every soft hammer swing and each movement the piano makes. Nils wants you to hear how the instrument works; he wants you to hear it as a machine. There are some sounds on the album that remind me of keyboards in the ’90s, and it’s probably cause the keyboards used were made in the ’90s. Usually I really hate that sound. Yet, the mix with this old school keyboard tech alongside the choice acoustic instruments just works. Aesthetic junkies like Frahm pay attention to this shit. If the vibe doesn’t work to the smallest degree then the entire composition will collapse. Frahm is incredibly dedicated to his craft, innovative, curious, and talented. If you don’t like a song at first, just wait a bit cause usually he has a plan.

So, that welcomes you to the newest audio space shuttle. Ready to get the fuck off of earth and just chill on the moon for a bit? Countdown begins when you push play.