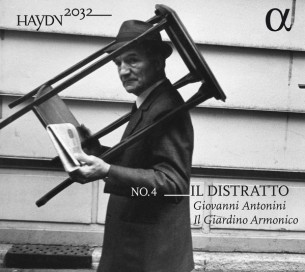 So, Giovanni Antionini, a man with a very subtle Italian name, and his bud Giardino Armonica, decided back in 2014 to embark upon a very difficult task. Like, shit. This is the task of all tasks, and it makes whatever anyone else is doing in comparison laughable. Do you notice the “2032” after “Haydn” in the title? Ya, that’s not so Haydn’s name looks like a Daft Punk album. These guys decided that, between 2014 and 2032 (18 years), all of Haydn’s 107 symphonies will be performed and recorded, in two fat releases each year, by them and the Basel Chamber Orchestra. Crazy, right? Not only this, but they have a ridiculous reason for doing so. It’s a birthday present. A fucking birthday present! And the birthday present is to Haydn himself who will be 300 years old, and still very dead, in the year 2032. La-dee-fucking-da !

All the same, how cool is that? Just think, this is only the 4th volume and you can listen along with these guys, watching closely to see if they fuck up or not, until the year 2032. 2032! Another neat feature is that the pieces aren’t performed or recorded chronologically, but are picked by the two Italian stallions for their sexy groove. So grab your smoking jacket and your pipe, it’s time to listen to some high class classical!

Mentor of Mozart and teacher of Beethoven. The father of the symphony and the string quartet. Joseph-motherfucking-Haydn, or, @TheRealJoeHay, as his social media tag would be now of days, is a funny guy. No, he isn’t Prior or Carlin. But he does perform little jokes in his music. For example, in the finale of Symphony No. 70, which is on this album, all the instruments suddenly tune up. I know. I know. It’s not going to make you piss your pants. But, if you want to impress some high baller boys and girls with your plump, quivering, tumescent, vast classical knowledge, then it’s good to know. If you hear a joke, it’s probably Haydn. Other composers take themselves really fucking seriously. I’ve heard some composers and orchestras try and milk these jokes for all their worth. It’s not a good look. It’s the same feeling as being a teen and watching your dad trying to breakdance in front of your friends. These Italian boys don’t work this way, they play it straight faced. And the jokes are better for it. Haydn is in good hands with these motherfuckers. I’m glad it’s them taking on this task.

Try and remember, Haydn’s music was made to entertain shitforbrains princes and rich inbred royalty: if it seems silly at some points, it’s because it’s supposed to be. You’re allowed to laugh. I hope you do at some of the singing on “Il maestro di cappella” aka “The master of the chapel”, where the dude just goes on for a while singing about what the instruments are doing: “This is the horn, it is blowing. Blow-ing. Blooow-ing!” Fucking hilarious.

This album was from 2017. I believe No. 5 is already out and No. 6 is on its way. So why not throw this shit on in the background one day while making dinner? By the year 2032, you’ll have listened to all of Haydn’s symphonies. That’s just badass.