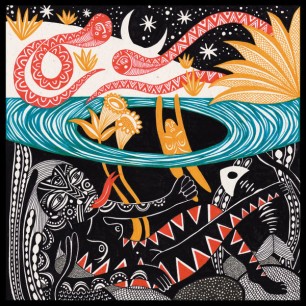 Some days are more difficult than others when it comes to picking out an album. Today was one of those. Nothing seemed to fit the mood today. I couldn’t quite get my eyes open even though I was awake. It’s like not all of me was quite there yet, even though I had already had my coffee. I went through Hip Hop, Classical, Rock, Indie, Folk, but nothing worked. I then threw a hail mary and turned on shuffle. What played was Arabic-like music mixed in with Miles Davis Modal Jazz. “Word?” I thought, “this shit is dope”. And what’s more, it fit. I understood its world. It was a fourth dimensional take on a 2D atmosphere. Music made for those days when you can’t shake your head awake. Where the dream world is somewhere just underneath your eyelids. One step is solid, the next can sink into the floor. This album works like a bridge, taking you from that world of dreams into a world of open reality. Or, alternatively, it dismantles you at the rough end of the day and brings you into a world of waking sleep. Animals like owls or cats, those that have one foot in the real world and another somewhere else, that’s this album. That’s right motherfuckers, today is going to be a weird one.

Yazz Ahmed plays the trumpet. Born in Bahrain but living in London. She’s played with Toshiko Akiyoshi, Jazz Jamaica, The Human Revolution Orchestra, Radiohead, Max Romeo, Lee “Scratch” Perry, Joan as Police Woman, and tons of others. The lady has got her credit and there’s a reason. When she plays she opens up a portal to a new world. Jazz artists and rock stars envy this power, so they rent it and say, “Hey everyone, look what I can do.” But it’s all her. If the music isn’t trippy enough, let’s look at how this album is built.

Four Chapters. Chapter 1: The Space Between the Fish and the Moon (songs 1–4). Chapter 2: The Shoal of Souls (songs 5–7). Chapter 3: Spindrifting (8–9). Chapter 4: Sarabandes and Nocturnes. I’m not making any of this shit up, it’s right there on her website. Supposedly, if you look over at that trippy cover you’ll see all those titles drawn into that one picture. I don’t know what most of it means. But I do know that “Sarabande” is a dance evolved from a Spanish dance with Arab influences, which also happens to be the name of famous classical songs from Erik Satie. And, considering Yazz is Arabic trying to mix her ancestry into jazz there’s a meaning in there. I also know Nocturne is a musical composition inspired by night. Ha! I didn’t do too bad. The fact that on a day like today, when I’m half in a dream world, I just happen to listen to and connect with an album associated with dreams and night and shit. That’s fucking awesome. It just goes to prove that no matter the mood or mindset, music is made to connect.

This album has so much more than I’m giving it credit for. I’m putting far too much of myself in today’s review, because I can hear the work and the years put into this album. But the mood of this album is hard to shake off. It’s influencing my writing even now. Like a dream I can’t wake up from. Fuck. Yazz is at the top of her game. And straight up, it’s one of my favourite jazz albums from 2017.