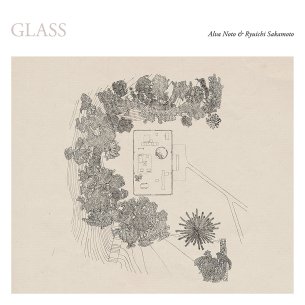 Time to chill the fuck out and focus on how air feels going in and out of your nose … motherfucker.

Have you ever watched The Revenant? You know that barely existing soundtrack in the back? Ya, that’s these guys.

Ryuichi Sakamoto, half of this duo, although unknown to many in Western Culture, is one of the most influential people living today (I’m so sorry, but there’s a bit of a rant coming on). He’s a musician, singer, composer, record producer, activist, writer, and dancer. The few awards out of the fuckton he’s won, if you’re into that, are: BAFTA award, Academy Award, Golden Globe, Grammy Award, and many more awards including lifetime achievement awards. Sakamoto is one of the main figures that helped develop techno, house, and synth-pop music. The dude basically made this shit up in the late ’70s. He made up genres of music! His album “Thousand Knives” made in 1978 (named to describe the feeling of mescaline [so appetizing]) took 300 hours to make and days spent without sleeping (drugs may have helped). It’s one of those albums that if someone went back in time and stopped it from being made, music as we know it now would be completely different. Actually, if you went through with this Terminator type of scenario, and Arnold Schwarzenegger went back in time to stop Sakamoto from making this album, an album that not only introduced the Roland TR-808 to the world but also showed off its versatility, you could effectively destroy or heavily alter the careers of: The Beastie Boys, Run-DMC, LL Cool J, Public Enemy, Whitney Houston, Phil Collins, Damon Albarn, Fatboy Slim, Talking Heads, New Order, Outkast, Lil Wayne, Britney Spears, Beyoncé, R Kelly, Robbie Williams, Madonna, Rihanna, Kesha, and most of all, especially considering the album “808s and Heartbreak” which is basically a love letter to this fucking machine, Kanye-fucking-West. That’s right. If you want the blueprint to destroy Kanye West, this is how you do it. Now, all you have to do is create artificial intelligent machines under your control and time travel, then Kanye West will be a thing of some other earth’s past.

Carsten Nicolai, aka Alva Noto, is the lucky and talented motherfucker working next to this legend.

These guys have made six albums together. They’re atmospheric and (sigh) experimental. I know. I know! Experimental is a scary word. Lots of people don’t like it. Is some chick going to show you some poorly painted self-portrait painted with her own menstrual blood? Or, like in the Big Lebowski, is someone going to fly through the air splattering paint over a canvas and describe why people say Johnson? (Johnson?) But, that’s not these guys. If you watched The Revenant, then you’ve already been through the experience. It’s not scary. It’s not difficult. It’s not made for bags of shit to show off. It’s chill as fuck. It includes giant glass singing bowls, bowed bells, and small clicks. If I’m completely honest, it’s music I often meditate to. That’s right, I meditate like a motherfucker! Expand your mind, bitch! This music helps keep me present and awake.

This album is a single song because it’s a single piece. You can actually watch a video of this album being made in a glass house. I shit you not, this was made in a glass house so don’t throw rocks. The music is beautiful and hypnotic, it has this way of feeling from the future and in the past at the same time (thus the Revenant soundtrack). If you like it, throw back to their other pieces. Everything they do is great. Now, clear your mind and think only of the sounds. Breathe in and out. And focus on how your breath feels going in and out of your nose.

One thought on “Alva Noto and Ryuichi Sakamoto – Glass”