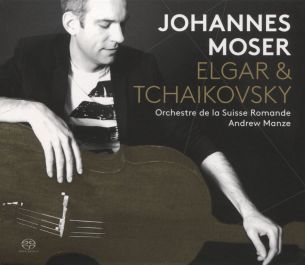 Who the fuck is Edward Elgar?

Edward Elgar was a British composer with a big motherfucking moustache that died in 1934. His last words before he croaked? “I believe there is nothing but complete oblivion.” Daaaymn, Elgar! Who hurt you? Well, audiophiliacs, there’s a story that comes along with this one. And it’s a sad one.

This album starts with “Cello Concerto in E minor Op. 85” which was Elgar’s last ditch effort at some good tunes. Dude wrote the opener for this shit after he got his tonsils removed. Bad ass. The rest of it was finished in some cabin in buttfuck nowhere Sussex. Elgar and his wife Alice were chilling there, all happy and perfect and shit (picture them frolicking, hand in hand, in a field of smiling sunflowers), when Alice started to get weaker. Elgar said, “She seemed to be fading away before one’s very eyes.” So, Elgar really wanted to perform this shit so she could hear it. The concerto sucked hard, like really hard. Every writeup in every classical history book compares it to pure garbage. The reason? They didn’t fucking practice. Alice was watching the whole thing and died soon after (now that’s a bad fucking performance) and Elgar couldn’t write jack shit after her death. For the romantics out there, Elgar’s heart died along with Alice. For the conspiracy theorists, Alice wrote all his good shit. (There’s absolutely no evidence for this, but have fun.)

Then there’s Tchaikovsky’s “Variations on a Rococo Theme”. My introduction to Tchaikovsky, as was the same with most, was Bugs Bunny (you can watch this here). Bugs loved playing the greats. Who knew animated fucking rabbits weren’t into esoteric compositions? (Rococo is just a style by the way. It’s from the late 18th century meaning lavish as fuck. Just slick, fat, and buttery tones pulling at your heartstrings like a double Big Mac.)

So, these are the big fucking hits. They require the emotional control and outpour of an Oprah interview and the dexterity of a street magician. Moser plays this shit like a fucking legend. Not only is this guy an absolute monster with a cello, but he feels this shit out. You can tell the guy’s playing what he cares about. He’s not rushing or trying to show off how big his dick is. He loves the fuck out of this shit. And in turn, it makes you love it all the more. En-fucking-core Moser. En-fucking-core.