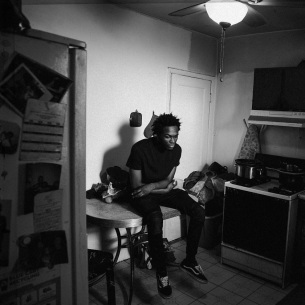 Rap is one hell of a multifaceted genre. It has produced the party anthems (“Party Up” by DMX), supplied stupid fucking songs like “Imma eat her a$$” from Lil’ B, it’s made entire albums dedicated solely to fucking (The Sexorcist). So I get it if someone had the passing thought that rap is shallow. Listen to what’s shoved down your throat. If you put all those radio singles in a line, this shit sounds dumb as a redneck fuck. But, peel back that thin layer back and you’ll see rap has always been keeping it real, aka being strong enough to wear your heart on your sleeve. In ’94 when Biggie said, “I see some ladies tonight that should be havin’ my baby, baby” he also produced one of the most honest tracks in the game called “Suicidal Thoughts”. 2Pac’s first single in ’91 was about teen pregnancy and child abandonment (“Brenda’s Got A Baby”). On Wu-tang’s “Tearz”, released in ’93, RZA raps about the death of his little brother while Ghostface Killah raps about his friend contracting HIV. Rap doesn’t mind a bit of heavy. In fact, it fucking loves it. By the end, you’ll be literally dancing to someone talking about some severe fucking problems. If that’s not healing, I don’t know what is.

Cut in with Saba’s album “Care for Me”. Dude talks about his cousin’s death by stabbing in February last year. Saba also speaks honestly about his depression, his failures and complications with relationships and love, his severe trust issues, and the dangers of living in Chicago. The chorus on song two goes, “I’m in love with broken girls—girls—girls—girls.” It’s playing on the tradition of rap music classifying women in two categories: tits and ass. But instead of throwing bikinis and lube on that stripper pole he lathers it with emotional immaturity and trust issues. Damn, that’s sexy. The first verse on the song drops in with,

Christ on a bike, Saba doesn’t fuck around or mince words. It’s a motherfucking anthem for falling in love with broken people. Everyone can relate to this shit. And if you don’t? You’re just lying to yourself and you’re either currently with, or pursuing, someone broken.

There’s not enough that can be said about this album. It’s too fucking good. There are critics everywhere wet as slip ’n’ slides over this shit. But I fear people still won’t listen to it. And I get it. Listening to an album this emotionally vulnerable might not be your idea of a good time. But let me give you some advice: Get over yourself, shut the fuck up, and press play. Cause hearing someone out who speaks honestly about their shit isn’t draining at all; it produces energy. It’s motherfuckers that fake their shit for attention, internet points, and money that are draining. Honesty is truly refreshing.