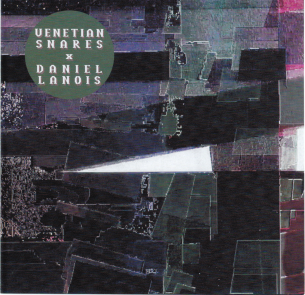 Venetian Snares (aka Aaron Funk) makes Breakcore, Drum and Bass, or what lots of folks just jumble together in a genre called IDM (Intellectual Dance Music). He’s loud as fuck and scary like Aphex Twin or Squarepusher. Daniel Lanois is famous for producing Joshua Tree by U2. Um, what in the actual fuck? On the surface they may seem to have nothing in common (They’re both Canadians. Though, with Aaron Funk albums like Fuck Canada//Fuck America and Winnipeg Is a Frozen Shithole, I just never saw him as the Maple Leaf touting type of dude). When I first saw this album, I thought it was like Satan himself partnering up with The Powerpuff Girls to defeat the colour Jupiter. It didn’t make fucking sense. But, as the album played on, I realized I overlooked Lanois and his highly innovative nature even though it has spanned his entire career. In a way, it defines it. The dude has worked with legends like Emmylou Harris, Brian Eno, Willie Nelson, Peter Gabriel, and Neil Young. He puts a piece of his soul into each record he produces. People have been trying to emulate his sound for years. I still hear new producers try to pull the Lanois sound and utterly fail. The man is untouchable. Lanois’s essence feels like you’re counting the stars in the back of a pickup on a crisp night in the desert. It’s a type of perfect space to chill the fuck out and expand your mind. That’s what he does to albums. He opens them the fuck up. So, why couldn’t he do that with Aaron Funk as well?

Lanois is playing his signature lap steel guitar with that heavenly reverb while Aaron facefucks the shit out of it. And it fucking works. It’s gorgeous. It doesn’t matter how different their styles might be when they’re both pursuing the goal of great music. I thought for sure Aaron would dominate stylistically, but that’s not the case at all. They share the stage. You’re listening to two unbelievably open dudes, each a legend in their world, step out into the scary unknown in order to grow. It’s impossible to listen to this and not be inspired to do the same.