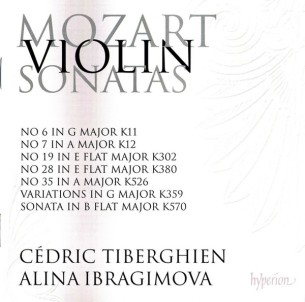 Sometimes, overambitious motherfuckers play what’s called a Sonata cycle. Cédric and Alina do this by playing all of Mozart’s violin sonatas. This is the fifth, and final part, in that cycle. Mozart would have loved this shit.

When people talk about their favourite classical composers, I’m always hella surprised when they say shit like, “Mozart, Beethoven…” What? You really love both those dudes? Or are you just naming off composers you know? Look, I get it. Both dudes are major in the classical world. But they aren’t even part of the same era or style. Mozart is all up in that Classical Era business and Beethoven is straight up Romantic. I find it impossible to confuse the two.

Let’s take a trip in my time machine, motherfuckers.

There’s that little fucking brat now. No, not that sophisticated looking man. No, not the diligent and respectful child seated politely next to him. See that 3-foot nothing piece of garbage that thinks his shit doesn’t stink? He’s the one screaming he wants more chocolate cake and wants to talk to the manager. Ya … that’s Mozart. You see that pompous look on his face? It’s permanent. He’s so stuck up his own ass I want to go over there and tell him he dies at 35, but I won’t. Can’t change the past and all that shit. Kanye would feel like a pair of old shoes next to this kid. Oh no, he’s going to play a fucking song. It’s beautiful. It’s all happy sounding and joyful. Yes, he’s mega talented and a child star. He’s like a Disney kid that won’t stop screaming. It’s undeniable that he’s beyond talented, but that doesn’t mean I don’t want to drown that little fucker in a birdbath.

Whoa, check out Beethoven. He’s a motherfucking rockstar. Dude just hates everyone that passes his way. Did he just throw that cigarette butt into his soup? Yes, he did. Fuck, now he’s throwing the soup at the waiter. His entire family hates him. You know when his nephew tried to commit suicide he blamed his uncle? Well, Beethoven did put that entire family through the courts for fucking years when he tried to adopt the little fucker. Did he love his nephew? Fuck no. Beethoven just don’t give a fuck. He’s moody. He’s angry. He’s goddamned punk rock. But there is a sadness about him. He’s deaf you know. Ya, dude almost offed himself when he first found out about it. Who wouldn’t think about it if they were in his position? Now he feels obligated to give the world his music, even though he can’t hear any of it himself. But, like a blind painter, he continues on. His life is a fucking tragedy. You see how paranoid that motherfucker is? Yep, that’s him all the time. I can’t help but feel bad for the guy. Now he’s going to play us a song … yep, exactly what you’d come to expect from a sad and moody motherfucker.

Little bitty Mozart would have loved this overambitious project. Cédric and Alina play this shit perfectly. Neither of them overpowers the other and they complement each other perfectly. You can tell they’ve played together for a long ass time. This shit doesn’t feel over-rehearsed. It feels somehow spontaneous, which is probably how it first came out of the bratty piece of shit. (Fuck, Mozart would have been the worst fucking kid. But, goddamn, could he write a tune.)

If you want to listen to all the violin sonatas from Mozart, I highly suggest this collection. I’ve gone from start to finish and I feel these two perfectly represent what these pieces were intended to do. Happy-go-lucky classical that lifts up a room in sophisticated fucking joy and blissful cocaine-filled neglect of the rest of the world’s problems. It’s perfect.