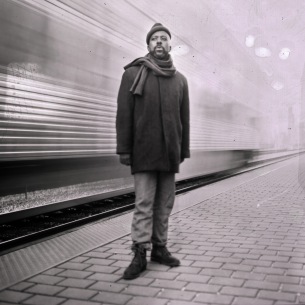 With a 30 second starting track made up of cacophonous delayed horns being pumped out of Stalin’s asshole, it’s hard to figure out exactly where this album is. But, similar to Haydn’s surprise symphony or someone slapping dat fine ass, this shit is made to wake you up. The rest of the album smooths out (somewhat) from there. Though, you really should wake up and listen to this shit, cause there are sounds on this I’ve never heard before.

Straight up? This can be a weird fucking record. It’s weirdo music made by a weirdo man backed by weirdo people. And that’s not a bad thing in this case. It’s not pretentious, not in the least. Some motherfuckers like to do shit like to strip naked, slap each other’s faces, pour chocolate pudding on each other and talk about their mother issues, then call that shit music. But that’s cause they are garbage. But Ben is a fucking genius. It’s obvious. And this shit is truly listenable. Just buckle the fuck up (Hey, at least you won’t be bored, right?) This isn’t experimental for the sake of experimentation. It skates right on that cutting edge. That place where that good and crazy shit happens. That place where Dr. Frankenstein makes a creature and some dude can turn mosquitos into dinosaurs. It’s a collection of prophecies foretelling how music will sound in the near-future. And when you hear it, you know the guy is right the fuck on. He’s that Bjork; Prince; Herbie with his Headhunters; and Davis type of shit. Give it a few months, or years, and hipster fucks will be picking up this record and saying, “it started right here”. Pieces of this album will be used or “reinterpreted” and taped onto songs that will make it platinum. It has deeply groovy tracks that make you laugh as you tap your foot, other shit sounds like jazzy house with a bit of R&B, and it even has some trip hop with a layer of what-the-living-fuck-is-this-shit. It’s fucking fantastic, even if it’s a collage of beautiful pieces pasted together. This album inspires you to fly your freak flag and to fly that shit as high as you fucking can.