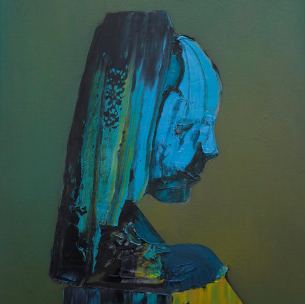 For those of you following along, you’ll know I’ve written about this motherfucker before. If you haven’t, and want a better description of this collection as a whole, then click here. But for the lazy fucks out there (go team!) here’s a brief writeup:

The man behind the curtain is James Leyland Kirby. He made a persona named “The Caretaker”. This persona has dementia. Each new release is one step further into depths of this disease. There will be six stages in total.

Now, onto the fucking album!

Stage 3 was made up of showtuney walzy ballroom type of shit with a bit of fuzz overtop. It was pleasant. It set nicely in the background while drinking an iced tea and hippies sang songs about peace, harmony, and all that good fucking shit. Ballsy motherfuckers might have even called Stage 3 conceptually grand but, when the rubber hit the road, a bit lazy. Stage 4, on the other hand, is a goddamn nightmare and meticulously crafted. It’s scarier than the music playing in a haunted house because you can always leave a haunted house. But the reality of being in the situation portrayed by this music looms over us all. As you continue to listen, you feel the pieces of a mind being lost. Recognizable samples of music are cut and spliced, stretched, and carved into a world of panic and fear. It’s fucking terrifying.

About thirty-four minutes into this shit you’ll hear the echoed reverb of what came before. There are still splinters of those happy-go-lucky big band jazz samples, but they come at you like flashes from a strobe light. In the next moment you hear the sounds of a jazz band descending into the Mariana Trench on rollercoaster train car.

James describes Stage 4 as such:

“Post-Awareness Stage 4 is where serenity and the ability to recall singular memories gives way to confusions and horror. It’s the beginning of an eventual process where all memories begin to become more fluid through entanglements, repetition and rupture.”

Intellectuals and all those other fucking fuddy duddies debate incessantly about whether or not art should be pleasurable. This album is a great fucking argument for the latter. Creating art that helps further the understanding and empathy for a silent population seems to be one of the main fucking reasons to make art in the first place. Cause fuck ignorance in its plump smiling asshole, it may be bliss from the inside but on the outside it often leads to narrow-minded evil shit. You may not like all the steps in listening to this album but it might make you a better person in the end.

P.S. If you want to make a donation to Dementia and Alzheimer’s research click here.

One thought on “The Caretaker – Everywhere at the end of time: Stage 4”