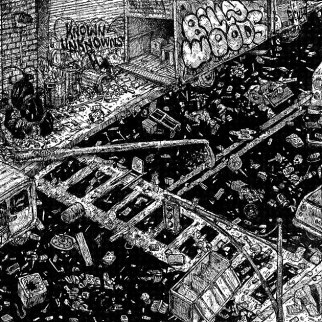 I’ve said it once and I’ll say it again. If you’re not listening to rap, you’re not listening to what the poets of today have to say. Just cause a bunch of fat ass professors think their dicks work like dowsing rods for what’s credible, doesn’t make that shit true. In fact, more often than not, what those motherfuckers deem as “high art” ends up lagging behind. If you hit rewind a bit on shit, there’ll be some 16th century fat ass professor saying the same shit about novels and the three-act play. Comics were laughable not so long ago. And not it a good way. Now as Disney laughs all the way to the bank, comic books are slowly being recognized as “high art” by those few hip and “edgy” professors. Fuck that shit. I’m not waiting for permission to study and enjoy the beautiful art that’s right in fucking front of me.

Billy Woods is one of the monsters behind the duo Armand Hammer. About that album I said, “This shit makes Shakespeare look like a Hallmark Card” (Fuck me, am I actually self-quoting right now? Please, someone fucking shoot me.) On this album, Billy takes an entirely different approach. These lyrics echo that Lewis Carroll, Coleridge, and Vonnegut type of shit. It’s that half-absurdist but realer-than-real view of things. But how about we show, then tell? Check it:

“Relaxed while Rome burned, head full of lye. / Both eyes dry / Lead-line bunker, limited air supply / Both hands high. Explaining how I came unstuck in time / So ain’t none of that mine”

What’s this guy saying here? Lots to fucking unpack so I’ll slow this down for you.

“Relaxed while Rome burned”: The phrase, “fiddling while Rome burns” basically means focusing on the small shit while big shit happens around you. It comes from the story of Emperor Nero playing a fiddle while Rome burned around him in 64 AD. Now that’s one cold ass motherfucker.

“Head full of lye”: This shit has a double meaning cause that shit’s a fucking homophone. One meaning of this line is that you’ve got a head full of “lie” aka, you’ve heard so many lies that your head’s full of that shit. Also, “lye” is rap slang for marijuana (check out Tupac’s “Krazy” if you don’t believe me).

“Both eyes dry”: This shit’s another double meaning. When some people get high as fuck their eyes dry out. But this shit can also mean that you’ve got no tears to shed cause you’re an emotional robot. Beep boop.

“Lead-line bunker, limited air supply”: This isn’t that hard to get. People go into a bunker when the world ends. And this shit could mean some emo fucking bunker people build within themselves so they don’t have to feel shit. Feel me? Either way, it’s not going to last long.

“Explaining how I came unstuck in time”: This is where shit gets really fucking interesting. If you’ve read Slaughterhouse Five, you’d know that the main fucking dude goes back and forth through time like a fucking pinball on a hotplate. The character specifically calls this shit being, “unstuck in time”. This character’s name is Billy. No, this shit is not a coincidence.

“So ain’t none of that mine”: This line puts the cherry on top. Both the character Billy from Slaughterhouse Five and Billy Woods in this line feel stuck in a line of thinking called “determinism”. Determinism: Shit is what it is, no matter what the fuck you do.

… Now, look me square in the fucking eyes and tell me that this shit isn’t poetry.