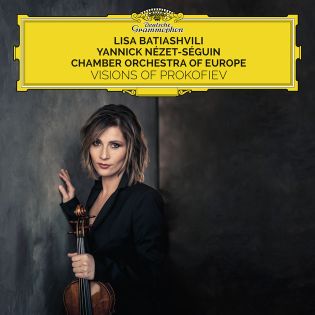 Lisa seems like such an eloquent, humble, and just a genuinely nice person. But when she plays that violin, she’s undiluted P.I.M.P. If it were strictly up to talent, Lisa would wear long flowing velvet capes that never touch the ground, sport a fat diamond-embedded grill with the words “Reine du Strad”, and have a golden cane capped with a purple emerald encasing the souls of those she has defeated in violin battle. Her fingers move like a fire that could seduce each of your happily married parents. Some argue that she’s the best alive. No matter your opinion on this, it’s undeniable that she works that shit like a fucking boss. Sweet holy hell is she ever fucking good.

Back in the day, I got a Fischer Price record player as a hand-me-down. I loved the shit out of that cream and orange motherfucker. One of my favourite records? Prokofiev’s “Peter and the Wolf” with David Bowie in the role of Narrator. Of course I went all DJ Jazzy Jeff with Bowie’s Baritone and spun, flipped, and reversed that shit till horny neighbourhood cats clawed at the windows. My love affair with classical grew out of that record (as well as Bugs Bunny). When I hear Prokofiev, something in my bones tells me that’s just how shit’s supposed to sound. First loves are a bitch.

If you think you don’t know Prokofiev, you know fucking Prokofiev. That’s how big this motherfucker is. The dude’s sound is bigger than his name. Close your eyes, think of a classical song that most resembles the sound of huge elephants walking, and what you’ll hear in your head is Prokofiev’s “Dance of the Knights”, the opener of this album. This song comes from Prokofiev’s Ballet “Romeo and Juliet” which originally ended with the friar stopping Romeo from icing himself and then Juliet and him dancing away like a pair of happy tits. Weird fucking ending.

Most of this album is composed of Prokofiev’s Violin Concerto No. 1 and No. 2. And straight up? This shit is really fucking hard to play. Part of the reason these pieces weren’t played for seven years after they were written was because it was that hard to find a pimp cold enough to play this shit. So, how does Lisa do? Just … fuck off. Seriously? Of course it’s fucking good. It’s Lisa fucking Batiashvili! The lady is an embodiment of fire and water. And the Chamber Orchestra of Europe is the perfect fucking backing band.

Those who won’t enjoy this album are like those people who eat raw potatoes, sand down foot calluses in public, and like to air dry in public showers. They may not be evil, but turnip-fucking-christ-flying-kites are they hard to understand.