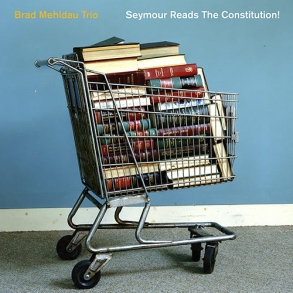 If someone were to tell me Brad Mehldau wasn’t human but a type of alien species named Sonicious that hail from the planet Monk, I would believe them. Cause that makes more sense than Brad being human.

If you’ve been reading along with an album a day, you’ll know that this the third time I’ve written about the marvellous motherfucking Mister Mehldau. The first time was with his work with Chris Thile, the second was with some Brad fuckery mixed into a Bach smoothie. My sauce has been heavy on the Mehldau, but I can’t fucking stop. I’d gladly stop writing about him. But what am I supposed to do? He keeps making beautiful albums. Brad is like my garlic, when the recipe calls for one piece, you’re going to get fucking three.

Anyway, what’s up with this album title? “Seymour Reads The Constitution!”? Have you lost your shit, Brad? Check it: Mr. Mehldau had this freaky fucking dream where Philip Seymour Hoffman reads the Constitution out loud. Huh? What the fuck Brad? So while he quietly listens to this dearly departed super-actor read the rules governing America, a melody plays in the background. Brad remembers this melody after he wakes up. It’s the fucking title track. Brad has now officially reached the mythical status of a biblical character. Noah, like Brad, didn’t know shit about building arks and shrinking machines (how else would they fit in there?) until he dreamt it. So now Brad is either a Sonicious or some celestial being is granting him fucking wishes. Tough choice.

In classic Mehldau style, this album includes a couple of modern covers (Beach Boys, McCartney) mixed in with some standards (“Almost Like Being in Love”) along with the three originals. Of course motherfucking Mehldau does a great job. But the real beauty of this album is the trio itself.

Larry Grenadier (the bassist) doesn’t just follow in the wake of this giant throbbing pianist. He pushes and challenges the fucker. Though, the big surprise comes from Jeff Ballard, the drummer. See, back in ’04 this trio lost the great Jorge fucking Rossy. The perfect drummer and musician. He went on to do is own badassery. But the jazz world lost their shit. Purist fans swore to never listen to the trio again. And filling the oversized Rossy shoes was Jeff Ballard. He was good. He played like a really good jazz drummer. Yet this wasn’t good enough for those fuckers. In this album it’s obvious that Jeff’s moved from a drummer into the same mythical status as his bandmates. He doesn’t fill the Rossy hole in a Rossy way but in a Ballard way. And it’s fucking awesome.

So, if you want to hear some guy fill some other guy’s hole while a bassist works a huge pianist dreaming about some other dude reading some shit, than this album is for you. Wait…