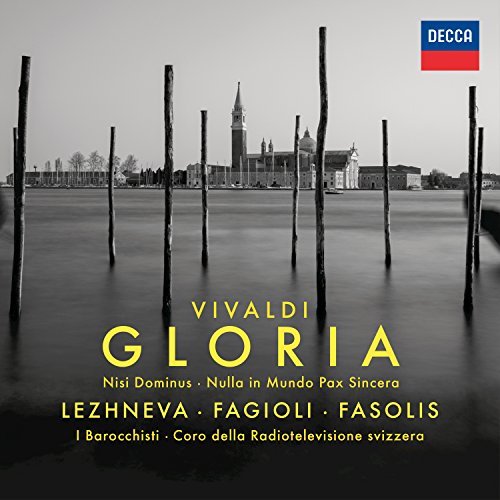 I neglected this album because the world needs another recording of Vivaldi’s Gloria like it needs a functioning asshole in the middle of its forehead. If classical music farted in a crowded elevator, it would fart out phrases of Vivaldi’s Gloria. It goes that deep. But why? Why is this so popular? Well, part of that blame lies with the composer Alfredo Casella, the poet Ezra Pound, and his partner Olga Rudge.

Ezra was hot shit back in the ’20s. This guy could seduce women like fucking crazy. He took pride in it. He worked on magazines and married a few equally hot writers. He’s the guy that introduced his buddy Hemingway to T.S. Eliot, James Joyce, and Robert Frost. Motherfucker was connected as fuck and deep in that scene. He didn’t give two shits about music till he met this fine piece of ass named Olga Rudge one day. They went on to tap each other’s asses for the next 50 years. And even though their relationship was fucking nuts: fighting, Nazis, Nazi love, imprisonment, torture, and Ezra’s eventual incarceration in a loony bin for 12 fucking years, they were true fucking lovebirds and were even buried next to each other though they were never married.

Anywho, Olga loved classical music. She was also a violinist. And, being the hottest fucking hipster couple on the block, these two decided to introduce their love of that deep underground shit to a greater audience. At this time, it meant Vivaldi. They tried starting “Vivaldi Week” a couple times, but it only really took off when Alfredo Casella took charge. I don’t know why Alfredo was the missing ingredient but, thanks Alfredo. Musicologists talked shit about Ezra cause he was a poet and they were hoity-toity musicologists and musicologists know what good shit sounds like. But challenging a poet to a word battle is about as stupid as insulting a comedian on stage. You’re not going to win that shit. After a few blowing insults, Vivaldi blew the fuck up and now, all these years later, Vivaldi is as common as the shit music they play in a grocery store.

What makes this album stand out is that, somehow, these songs sound fresh again. Most other versions of Gloria I’ve heard rush through at hyperspeed, which comes across like an asshole uncle rushing through “the birthday song” at your 9th birthday party because he’s heard it too many times. So, fuck those interpretations and fuck uncle Tim. These singers are on fucking point and this orchestra plays this shit without sounding dull. This is the best-looking Gloria in a room full of Glorias. It’s the Gloria that all those other Glorias want to be. When I hear that choir sing out, I want to scream: