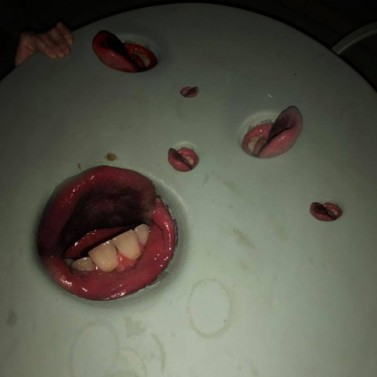 Hold on to those asses, motherfuckers, cause this one’s a doozy.

Death Grips is a band that will scare off most. At first, it kinda sounds like what would happen if a demon possessed Hip-Hop, injected a cocaine/heroin mix into its clit while shoving a NyQuil soaked tampon up its ass and watched Tool play their favourite IDM covers. This music makes most punk look like ducklings in tiny sailor hats. Stefan Corbin Burneet, aka MC Ride, is the lead vocalist of Death Grips and combines aggressively hardcore lyrics that you’d generally hear at an industrial metal show in a Scandinavian monastery and mixes it with spoken word. Somewhere out there is a deeply concerned mother. She’s concerned because she once heard Death Grips blaring from within her child’s bedroom. When she heard those unholy beats through the door she thought to herself, “Yep, that little motherfucker’s on all of the drugs”. To be short, this music isn’t what you’d call standard. It can be slightly experimental and might push some of your limits. But, and this is truly fucking important, if you allow the album to play, by the end of it, you’ll find something you love. Sure, at first it might be something small, a single crack into the world of Death Grips, but that will be enough. Cause, as we all know when it comes to crack, a small taste is enough to get you hooked.

Back in 2014, Björk recorded original vocal tracks for their album The Powers That B. David Bowie was so inspired after hearing Death Grips that he went off to make his final album Black Star. William Shatner and Robert Pattinson are also known to be fans. So, just to review, that’s Bowie, Björk, Captain James motherfucking T. Kirk, and that guy who played a teen heartthrob vampire that sparkled in the fucking sun, they all like Death Grips. And, after listening to this album, I’d say this makes complete fucking sense.

This shit is challenging. Fuck, I’ve heard it said that this is the Hip-Hop that plays in the Black Lodge on Twin Peaks. It’s truly fucking fantastic. It has the grandeur of Hip-Hop, the anger of Punk, and the experimentation and threat of Electronica. If you ever feel like music is getting predicable, listen to Black Grips and realize you’re a fucking moron. Death Grips have that type of sound you know will be everywhere in the future. They’re paving the way to what a lot of music will sound like one day and, love it or hate it, it’s here to fucking stay.