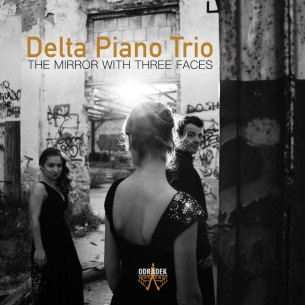 Warning: I do not know Russian, at all. Though, for shits and giggles and because it fits contexually, I’m going to attempt to throw in some Russian phrases. Don’t get your shit in a knot if I get it wrong.

Охуеть can those Russians write some good fucking tunes!

The Delta Piano Trio is made up of Vera Kooper (piano), Gerard Spronk (violin), and Irene Enzlin (cello). These three talented motherfuckers all hail from the Netherlands but met in Austria. After cooking up some fine Dutch pancakes, they turned to each other and realized, “hey, we’re all really fucking good. Want to try and…” And the rest is history. Рыба́к рыбака́ ви́дит издалека́.

First up on this album is motherfucking Shostakovich and his “Piano Trio No. 2”. For those that don’t know, Shostakovich was as Russian as borscht in a vodka bottle and lived during the time when Stalin was swinging his big red hairy dick around the country. You can feel Shostakovich’s rage, anger, and pain towards what was happening around him in this piece. At times, it’s ghostly. This trio strings out glass-shattering high harmonics that bleed and meld together into an ominous soup. As the piece continues, you begin to visualize a red Russia done up in boisterously drunk theatrics. At any moment in this world, I can picture a clown coming up to me, grabbing me by the shoulders, and whispering to me, “get the fuck out of here” as tears stream through his heavily painted smile. Near the end of this piece, Jewish melodies arise. These melodies skew to the point of losing all identity or semblance of what they once were and end in complete chaos till … oh… I see. That’s pretty fucking clever, Shostakovich. The piece ends quietly, leaving you to ponder the reality of the situation. The Delta Piano Trio play this shit as if it was their own story.

What makes up the rest, and the majority, of this album is composed by the American, Russian-born, Lera Auerbach. Lera is really охуенно good. She is also the epitome of the phrase “Каждый кузнец своего счастья” (Every person is the blacksmith of their own destiny). Lera sponged in the Russian influences of Shostakovich and Schnittke and then carved out her own distinctive voice from there. Back in the day, and broke as fuck, Lera used to walk hundreds of blocks to study at the Manhattan School of Music. Lera bleeds passion. She’s a real artist, through and through. Her music comes with one foot set in the past as the rest ventures and floats away into new fucking dimensions. She’s not tethered by her influences, she’s secured by them.

So, three stupidly gifted musicians and an amazingly talented young composer come together. What the fuck do you think happens?

This album is fan-fucking-tastic. Piano Trio No. 1 and 2 from Lera are a journey. At times, they inspire sweetness like honey. At other times, they build and march with an addictive madness you want to possess. The turns and whirls on this sonic ride are superb. It’s like getting delightfully drunk without the shitty hangover. These pieces feel like they were made to be played by the audacious Delta String Trio. Frankly, it’s difficult to picture another trio performing it. I could go on, but I think I should take the advice of a Russian proverb I read, “Больше слушай, меньше говори” which means to listen more and talk less. Wise fucking advice.