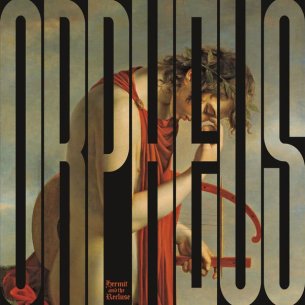 Hot off the presses! Brand spanking new! It’s a debut!

If you haven’t heard of Hermit and the Recluse, it’s cause no one fucking has. This is their first album and, by fuck, it’s a real doozy. It takes some seriously fat ovaries or some massive balls to come out with a debut rap album based on the famous Greek legend of Orpheus. Ya, you know the one. Orpheus is that motherfucker that went down to hell to get his lady but fucked up last second by turning around and poof!; bye bye boo. He’s also that motherfucker that’s so good at playing his shit that he can bring things to life, like rocks or your friend’s marriage. This dude is majorly fucking significant in those Greek tales. What New York rapper Ka and producer Animoss do is compare the myth of Orpheus to the reality they have lived. You may think at first, what the fuck does a Greek legend and some kid from New York have in common. Well, check it:

“Till the roar of the silence, we at war with the tyrants. Blocks of outlaws, but all we watch out for is the Sirens.”

See what Ka did there? Police sirens vs. those heartless Greek cunts that drew in ships with song and then those ships would get fucked by some rocks and die. This is one single step into the world of Orpheus vs. the Sirens. The first song of this album references harpies, Cerberus, Furies, Hydra (The Hydra of Lerna), Chimera, Minotaur, Cyclops, and Medusa. You ever wonder how legends get passed down from one generation to the next? This is how it’s fucking done. And, not just that, this shit gives an entirely new point of view on a 2500-year-old story. Now that’s some highly intelligent shit.

If this was all just poetic comparison, it would be fine enough. It would be enough for you to take a listen. But what makes this album so fucking good is how this poetic platform allows true honesty to come through. Whether it’s talking about daddy issues, “The hardest hitters was the father figures”, or economic status, “My crust wasn’t upper, so a sucker I never been”, or dealing drugs and lack of education, “To raise a quarter played the corner, no better rook. Yes fella was bestseller before I read a book”, this shit is unbelievably honest music. Injecting new meaning and honesty into a Greek legend is hard enough; to make that shit personal, now that’s fucking art.