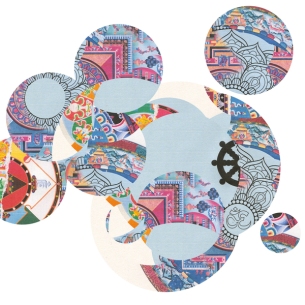 Eric C. Burton (Rabit) is one strange and uncompromising motherfucker. He’s a kind of dude that makes exactly what he wants without giving a single flying frozen fuck if it’s radio-friendly. His pursuit is art. That’s it. And anyone that doesn’t like that can go suck some extra caged cruelty-added inorganic overripe macro brewed lemons.

Back in the day, Eric made experimental grime music before breaking out with his alias and debut album Communion. In 2017, he was a featured producer on the track “Losss” on Björk’s album Utopia. This means the motherfucker made the avant-garde elite. Most people, when handed the keys to avant-garde royalty, sit back, redo that single past hit in a thousand different ways, and make a nice living. Sure, you might have to buy some random pet camel or a serval cat or two to stay relevant and in the news, but it’s not that difficult of a game to play. What Eric did was completely changed his style, started up the label Halcyon Veil, and then made strange, scary, daring, and authentic music.

This latest album is a tough one to crack, as it’s intended to be. On tracks like “Spiral”, strange voices will whisper out in bass-heavy drone, “Rebirth through stoning. Rebirth through ruins. Rebirth through hunger. Rebirth through death. Rebirth through rats, epidemics. Reducing human living to animal level. Will there be new Einsteins, Toscaninis, Marie Curies, Sun Yat-Sens? Or new Hitlers?” Obviously, from this, you can figure out that the theme of this album is not lollipops, back rubs, and oral sex. Shit gets really fucking real and dark as Satan’s asshole. This album is like a sci-fi soundtrack to the non-fiction reality taking place in America (and maybe even to a country near you!). It turns reality into fiction in order to be analyzed, then abruptly turns that shit back.

Eric makes sound collages. Pieces of this and that are pieced together in a way to make a new image. I get if this new image seems depressing as all fuck to you. But there’s also a strange hope in it. On the last track, minor keys are plucked next to the sounds of children playing as some modern (yet antique) projector whirls in front of you. But, don’t relax just yet, cause even as this new-found peace settles within you, a 1950s radio announcer voice ends the song by saying, “Children, the human raw material of each shattered nation’s tomorrow.” Fuck, Eric! I was just starting to feel better about the world.

The true optimism of this album may not be in its theme but in how beautiful things can grow from shit. Eric looked around his American home and decided to make something beautiful from it. Because when life gives you lemons you should make lemonade, even if those motherfuckers are made up of extra caged cruelty-added inorganic overripe macro brewed bullshit.