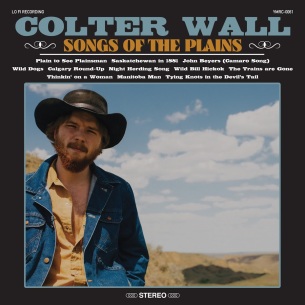 The last time I wrote about Colter Wall I said, “He sounds like he’s going through his fourth divorce with a stripper named Sinclair from Elko, Nevada he accidentally married while high on amphetamines and woke one morning next to Johnnie Barber (Johnny Paycheck’s former drummer) asking him for 50 large so he can co-invest in an alligator farm outside of Blue Eye, Alabama.” That fact hasn’t changed. At 23, this motherfucker’s voice still doesn’t make a lick of sense. But, if it was only that throaty baritone gold that made Colter distinct I wouldn’t be fucking writing about him.

The majority of modern country music fucking sucks. You can’t even call that shit music. When some fuckface wrapped in denim talks about drinking a cold one in the back of a jacked-up truck with some gall in skin-tight jeans and the whole story sounds eerily like a defendant pleading his case against a rape charge and some chorus pops up with pandering shit like “This is the good life,” a sudden urge to drive newly sharpened pencils into my eardrums takes over. But … go ahead and tell me with a straight face that you hate Johnny Cash. Go the fuck ahead and try. See? You can’t, because Johnny Cash is fucking legend.

Back in the ’70s, a group of country musicians met with a shitton of hippies. What came out of this meeting was “Outlaw Country”. Outlaw country includes names like Johnny Cash, Willie Nelson, Townes Van Zandt, Kris Kristofferson, Steve Earle, and Waylon Jennings. Throughout the years country music has broken off into subcategories like: Americana, Bluegrass, Cajun, Country Blues, Country Folk, Alternative Country, Roots Rock, Hokum, Southern Soul, and Talking Blues. It became difficult to tell which way is up. Colter Wall cuts through all this bullshit and just plays good Outlaw Country music. He’s an absolute avid student and prodigy of the art form. He understands how a good song is built. He knows how to write a song and knows how to perform it. Ten seconds into a Colter Wall song and you’ll forget Pop Country exists. That’s how healing this shit is.

I’ve heard the term “retro-fetishism” when it comes to Colter Wall. I really don’t agree with the use of this term. I know the music may sound out of time, but Colter isn’t chasing after an unattainable ideal. He’s from Swift Current. And, if you know anything about Swift Current, you’d know that it’s between where-the-fuck-is-that and who-the-fuck-cares with a population of goddamn-that’s-small. He’s a true blue prairie boy singing about prairie songs. Sure, he may turn up the details a bit. Maybe he even exaggerates some aspects of country living. But if you’re from a town no one cares about located in a province everyone makes fun of inside a country that people continually take a piss out of that’s part of a culture that’s going out of its fucking mind, you’re allowed to take a liberty or two because you’re “exotic”.

I know it maybe difficult to wrap your head around a cowboy with a twitter account and a cellphone. It might even make you angry. But if you want to get angry at Colter Wall, you’re going to have to get your shit in a knot at Don Quixote too. Whether it’s attacking a windmill dressed up as medieval knights or singing a modern day song in the style of ’70 Outlaw Country, if finding meaning and purpose in this world means you filter it through something that has sense and has values, then yee-haw motherfucker. Yee-the-fuck-haw.