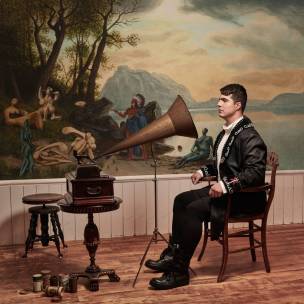 This record has more guts than you’d expect to hear coming from a classically trained tenor singing and playing piano. For one, fuck English, this shit is sung in Wolastoqey, a language spoken fluently by fewer than 100 people. Now, why would Dutcher do this? Because his goal is to, not just preserve, but to grow, replenish, and reanimate his Wolostoq culture. All these songs come from Dutcher listening over scratchy 110-year-old field recordings of his culture’s music stored in some cold basement of a museum. This album came from, and was made for, his community.

That album art up top acts as a giant middle finger for those that have continually tried to eradicate his culture. That painting set behind Dutcher is called “Teaching the Lost” by Cree artist Kent Monkman. The album art itself, art-directed by Monkman, is an interpretation of a photo of France Desmore, a photo that has come to encapsulate the colonial attitude of preserving cultures that you’re actively fucking over. How badass is that? And we haven’t even gotten to the tunes yet.

Dutcher recently won the Polaris prize for this album, which is like Canada’s version of the Mercury Prize. Obviously, this album has reached more than just the Wolostoq people. Three seconds into this shit and one reason for the wider attention becomes clear as glass. Dutcher is a boss musician. This motherfucker has got some pipes. But, let’s be honest, there’s a lot of good singers out there. But if you can picture someone singing, not just for their own life, but for the life of their family, their heritage, their identity, and for the future of their people, now that’s a voice that’s going to have some heft, punch, and fucking echo. Add to this that it was illegal in Canada for many years, under the Indian Act of 1876, for his people to practise their culture. Suddenly, Dutcher’s clear and resonant operatic voice feels more like a scream for survival.

The songs themselves are unbelievably beautiful. They even ask the listener to redefine what the term “classical music” means. None of these songs have an English translation. And as I was scrolling online to find what the songs and words meant, I felt suddenly dirty. Generally, if I’m listening to a song sung in a language I don’t understand, I’ll look up that shit faster than you can say An die Freude or L’Orfeo. But when one of the main goals of an album is to preserve the language it’s sung in, I feel like it’s wrong to throw that shit into Google Translate (though Wolastoqey is definitely not an option … yet). Listening to this album is to listen to an artist sing to his people. If Dutcher does decide to, one day, sing these songs in another language, I’ll be there with bells on. But, for now, I’m happy to sit and appreciate from the sidelines. This ain’t my party. And I think Dutcher and his culture would appreciate one less motherfucker busting down his front door uninvited.