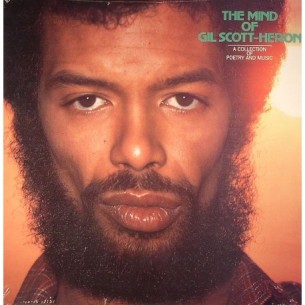 “I’m sorry, the government you have elected is inoperative…
Click! Inoperative!”

He’s been called the godfather of rap, the black Bob Dylan, Richard Wright with a Marvin Gaye voice, a CNN for black neighborhoods, but he preferred to be called a bluesologist. His work has been sampled by Grand Puba, Black Star, MF Doom, Mos Def, Dr. Dre, and Kanye West (back when he was still good and his head was screwed on straight). His famous song/poem “The Revolution Will Not Be Televised,” have been thought out, rethought, and reinterpreted by rappers like Talib Kweli, Common, and Aesop Rock. It’s one of the most famous tracks of all fucking time. Without Gil there wouldn’t be conscious rap or poetry slams. You might think that Gil was some hard motherfucker, that his music screamed at people, that he used his words like a hammer. But that’s as far from the truth as a Trump tweet. This motherfucker was smoother than a silk fart. As his beautiful band played out instrumental jazz tunes Gils words would fall on you like morning mist. With Gil, you never knew when the poetry began or when he was just talking. He was that fucking slick.

The scariest part of this album is the date written on the back. It says 1978, but I can’t believe that shit. Sure, he uses names like Nixon and words like WaterGate (he liked to call it H20 Gate) but it relates so well to what is happening at this very moment that I’m pretty fucking convinced that Gil was a time traveller. Don’t believe me? Check this shit out:

“How much more evidence do the citizens need
That the election was sabotaged by trickery and greed?
And, if this is so, and who we got didn’t win
Let’s do the whole goddamn election over again!”

“Keeping the school systems segregated
Allowing the press to be intimidated
Watching the price of everything soar
And hearing complaints ’cause the rich want more?
It seems that MacBeth, and not his lady, went mad
We’ve let him eliminate the whole middle class.”

Goddamn, that’s some good shit. After I listen to this, a piece of me gets depressed that the same problems in 1979 are the same ones we have now. This album has poems/songs about corrupt politicians, black people being shot by cops, the overpopulated/corrupt prison system, racism, greed, and basically every other fucking thing that America still struggles with to this day. But, when Gil comments about it, even though the issues he’s talking about are serious as hell, he’s still slick about it. The message gets through, ruffles feathers, but leaves everyone smiling. For instance: What’s Gil’s name for a politician who has been in Congress for 25 years but no one has ever heard of? An oatmeal man. What does Dot Dot Dit Dit Dot Dot Dash mean? It stands for “Damned If I know”.

The song “The Ghetto Code (Dot Dot Dit Dit Dot Dot Dash)” alone makes the entire album worth it. At the start Gil takes you through a history of months. You read that right, months. Gil confesses, “There is something wrong with February. I have been watching February closely” and he gives the greatest reason possible as to what’s wrong with February. He tears apart the alphabet, confessing that one of his favourite letters is “C”. This may seem absurd, but throughout this absurd narrative comes some of the most intelligent commentary of modern society ever fucking made by a human being. He’s a legend for a reason and one of the greatest to ever pick up the mic.

As I watch the news and someone I love asks me why there is only terror, violence, racism, and vitriolic hate being shown I want to answer, “Dot Dot Dit Dit Dot Dot Dash, but remember the revolution won’t be on there.”