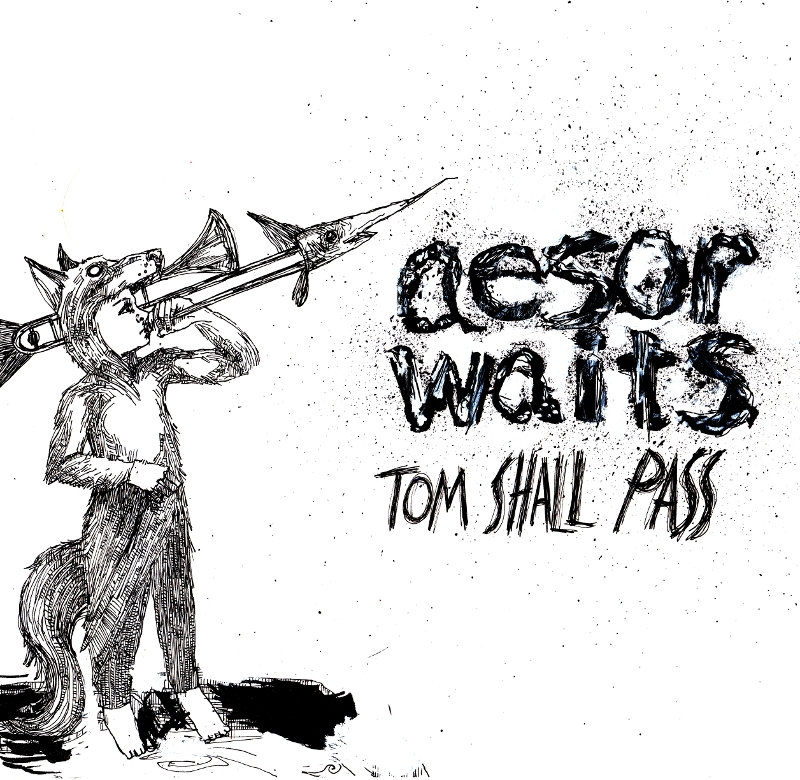 What the fuck?! Is this what I think it is? Can it be? How the—What the-

*The excitement overpowers me. I raptor-squeal and drool like a drunk syphilitic koala as I chicken-walk around the kitchen. The cat stares at me nonchalantly, blinks heavily, and gently goes back to sleep. That poor cat has seen some heinous shit.*

If you think this shit sound eerily familiar, it’s because it fucking is. This is a mash album of Tom Waits and Aesop Rock. Let me be clear: this not a collaboration of two musical gods. It’s a mash-up, motherfuckers. Remember, back in ’04, when Danger Mouse squished Jay Z’s Black Album together with The Beatles’ White Album to create the Grey Album? Shit works like that.

This album dropped in 2014 by someone called Aesop Waits. Nobody knows who the motherfucker is. This album works like a peanut butter and pickle sandwich, apple pie and cheese, apples topped with salt and pepper, and an avocado with chocolate. Shit shouldn’t work. It can’t work. It should be a sin if it did. But, hot Pillsbury fuck, this shit works. This is a paring made in hell but it burns like scotch. The thick industrial stomps of Waits’s instrumentals back the lyrics of the neologist, wordsmith, letterman, and rap-god, Aesop Rock. If you don’t know Aesop or Waits, don’t let this be your intro. Actually? Stop reading this shit right the fuck now. Go listen. Nothing here can equal the pure beauty, impact, and art which is Aesop Rock and Tom Waits. Listen to both their discographies in full, get your shit irreversibly changed, and then come back and listen to this album as the fresh bubbling fan of both living legends that you’ll inevitably be.

The track titles on this album are the shit. They’re malaphors and portmanteaus. They’re what? Malaphors and portmanteaus, motherfuckers. Before getting dumbfounded and angry crunk, chillax while I personsplain how shiznit portmanteaus are to you netizens and screenagers (though, I bet you can guestimate what portmanteaus are already). This shit happens when you meld two words together. On this bodaciously ginormous musical bromance of an album, you’ve got titles like: Reeperlawn and Chocopigs. Two words melded together. This shows what titles were used to combine the tracks. Fucking neato, hey? A malaphor is when two phrases or metaphors are put together. Sounds confusing? Well, don’t judge a book before it’s hatched. We can still teach an old leopard some new spots before pigs freeze over. See? Malaphors aren’t rocket surgery. So when you read the track title “None in Japan” you’ll know it’s Aesop’s “None Shall Pass” mixed with Wait’s “Big in Japan”: fucking cool!

I know to some of you this will be blasphemous. You don’t want anyone fucking with your favourites. But, thing about that is, it’s going to fucking happen. Back when The Grey Album first came out, EMI was all up in arms about it. They didn’t want anyone fucking with The Beatles. They threw down legal cases in order to stop it. When sampling came around, way back when, we opened a can of worms and now we’ve got to lie in it. But every cloud has a silver spoon in its mouth. Albums like this are not intended to ruin someone’s career. It’s a motherfucking homage. In case you’re wondering if Aesop Waits is a fan of Aesop Rock and Tom Waits: Does a bear wear a silly hat? And when it comes to figuring out what to do when, one day, music is composed entirely of sampled material and “original” material is no longer created: we’ll burn that bridge when we come to it.