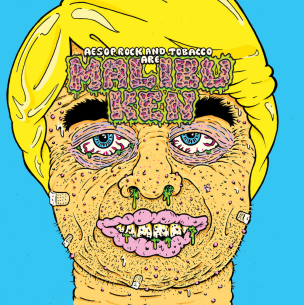 Fuck, I love me some Aesop.

Actually, if there’s one weakness I’ve heard people about Aesop, it’s that his shit is too thick. It’s like trying to suck a milkshake out of a skinny straw. Sometimes shit just doesn’t work. But, with TOBACCO producing these slick fucking sounds (famous for Black Moth Super Rainbow) that skinny ass straw doesn’t exist anymore. Now? This shit hits you like a fire hydrant on Viagra. It’s all money shot all the time. The beats and sounds follow the words to the fucking “T”. Sounds sit back when the words need to step up. And the sounds step up when the words require a helping hand. TOBACCO with Aesop Rock is a fucking dream team. Even though this album only clicks in at 34 minutes, it works like a philosophy book. You can’t judge this motherfucker by its size. I’ve seen stupid people read thick books. I’ve seen short people dunk. Or, as lots of motherfuckers like to say, it’s not about size but about the wielder of the tool. And with Aesop meets TOBACCO? It’s goddam Zorro with Kenshin Himura up in this bitch and they’re fucking like Greek Titans.

Like I said before, when you deal with Aesop Rock you are dealing with lyrical madness. You’ve got to be ready to throw down some thick biblical allusions and lyrical paths. I’ve often said that rap is the modern day poetry. And if that’s the case, Aesop could possibly be the best there is. I know there will be other review sites out there telling you that this album isn’t as good as his older shit or that he doesn’t have anything new to say, but fuck that noise. From what I’ve listened to? This shit is dense, fun, and sweet. This shit is like chewing through a sonic caramel that happens to make you smarter instead of giving you cavities. The only thing that’s changed about Aesop is there’s more playfulness to be had and the lyrics are easier to digest because of the production. Outside of that? Aesop Rock is still the king. But now’s he’s got a dope throne that can support his lyrical weight.