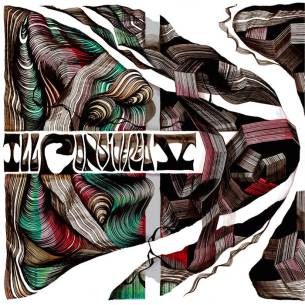 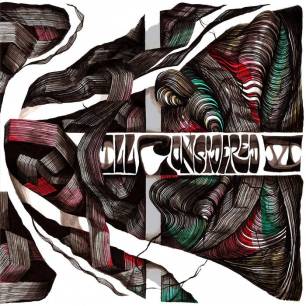 See that artwork? These albums are supposed to go together. Look at them! Released on the same day, fitting together seamlessly, their names are V and VI … You know what? Fuck it. I’m reviewing this as a single album. Arguments? Speak up. What was that? Oh! You completely agree. Excellent. Say again? Well, thanks so much for noticing. You don’t look so bad yourself. Everyone good? Sure? Well, fan-fucking-tastic then.

Idris Rahman (sax and bass clarinet), Leon Brichard (electric and upright bass), Emre Ramazanoglu (drums, mixing, mastering), Satin Singh (percussion) are the motherfuckers behind this show (with guitarist Steve Ashmore featured on IV). This is how Ill Considered builds an album. First, dedicate your life to improvised music. Second, come up with a few musical ideas and map them out. Then finally, play out those ideas, improvise as hard as you fucking can, and record that shit. It’s a simple formula. But step one’s a motherfucker. There’s an old legend people toss around in situations like this called “The Handyman’s Invoice”. The lesson boils down to this: It can take a lifetime to do one thing boss as hell. And don’t be a hater when someone does something fly.

V starts out with a bassline that could seduce a blind rock at the ass end of a cave. A little snare roll peeps up, then a horn, then some percussion. A song begins to form. Things grow and flourish. This jazz grows out of the soil before it unearths itself into the dense and heavy sonic brush. This doesn’t hail down on you like a pestilence. It overtakes a room and crawls into tight spaces like thick fog. This album(s) is to be put on and listened to. It affects the mood of the room like a good Miles Davis. By the time VI rolls around, you’ll feel like starting a business as a private eye, drinking and smoking continually, and speaking in overly dramatic and specific metaphors…

*Lights a smoke, takes a deep drag, and adjusts the fedora.*

This town’s not big enough for two of these bands. Their beats hit like a kick to the groin and that bass slides velvet down your leg like a panoramic shot of 8th and Crescent. As soon as that horn walked in, I knew it was trouble. It was hip, young, and too gorgeous to be in a place like this and next to a mug like mine. There was something ominous in its tone, like some terrible secret sat right behind its eyes.

*Coughs like mad, passes out, and shits into own fedora.*

Ill Considered aren’t going anywhere anytime soon. This album(s) was recorded only a year after their first. That’s some prolific fucking output. With each release these dudes feed off each other more naturally, grow more daring in their sound, style, and production (thanks Emre), and find sonic themes more experimental than the last. Only two options seem possible if they continue at this rate: 1. They last as long as they can before fading away out of complete exhaustion. 2. They continue to get better and better until claiming their title as one of the greatest improvised jazz bands of all time. In either case, it’s going to be one hell of a fucking show.