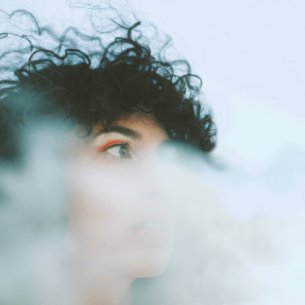 It’s an out the blue brand new debut that you never knew, not to be misconstrued or subdued but chewed through, looked into, and added to the musical queue. So let’s review. Ya-tothemotherfucking-hoo!

Lip Talk is fucked up pop. It’s the kind of pop that puts on ruby-red lipstick as mascara runs down its face. It wears ripped stockings, broken running shoes (without laces) that seem to talk with each step, and a tight-fitting leather jacket (but only to hide the smell of B.O.). It’s the kind of pop that separates found unlabelled pills into groups of three before taking them, snorts heroin because everything else is “tacky”, and smokes cigarettes that smell of burnt popcorn. It’s the kind of pop that, despite everything, is loyal, reliable, and unbearably honest. It doesn’t wear cosmetics to hide. It looks this way for its own self. Sure, it may wear all the adornments of its traditional step cousin, but they’re only slightly related. When really looked into, these two couldn’t be more different.
I can already hear the comparisons to Kate Bush (especially the vocals on “Artemis”), which is not a bad thing. The lady behind the name Lip Talk is Sarah K. Pedinotti. On the first half of this album, Sarah has that clusterfucky kind of writing style. Vocals shake and rattle into thick drunken baselines and change into clicking sounds that eventually become keyboard slides. It takes some active listening before these songs get their thick knife-sharp cracked nails embedded into your neck. There are musical decisions taken that will feel strange before they feel fantastic. If this album had come out 10–20 years ago, the only comparison made would have been Björk. Because it’s in that ballpark of strange. Now of days, this kind of pop is a style. It’s a pop for all of those lovely social rejects everywhere.

The ass end of the album slows down somewhat. The drum beats, though still completely unique, no longer changes from second to second. I know for some this will be seen as a cop-out, or they might think Sarah didn’t write a cohesive album. But I don’t feel that’s the case. I feel like the first half gets you in the door and the second is what she wants to fucking say. Second half takes on a drug-induced Adult Swim R&B style with a production that sounds like the reincarnation of Prince as a 20–30 something woman (which that motherfucker would have loved). This pop chokeholds that plastic doll-like step cousin that hid behind baby-baby-baby-babies, cavernous cleavage, and tabloid gestures. This pop is honest, freaky, and real. It’s the pop of the future. And, if it’s not, then it fucking very well should be.