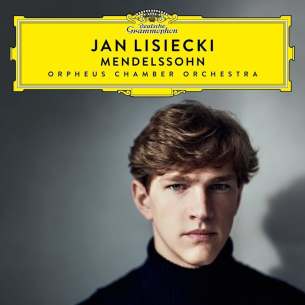 *I look over the album and sit down with a shrug. After putting on some thick headphones, I nonchalantly press play. The rush from the intro of “Piano Concerto No. 1 in G Minor, Op. 25, MWV 07” throws me deep into my seat like I’ve gone 0–60 in two seconds. I grit my teeth. The skin on my face stretches back and flaps slightly in some strange indoor wind. I’m physically unable to blink as my pupils dilate to the size of golf balls. People going through astronaut training next to me look over and vomit into their suits. Mothers hold onto screaming children. My bones begin to crack. Reality stretches and augments and, for a single moment, I can see one second into the future. The intro finishes. I unclench the armrests of my chair and press stop.*

Holy shit. You’re gonna wanna turn this the fuck up.

Jan Lisiecki was born in ’95, which is good for fingers and for that “fuck you” attitude that can breathe life into classical music. But unlike so many other young talented fucks, Jan plays with a maturity beyond his years. I’m fairly convinced that Jan has pulled off some Picture of Dorian Gray kind of shit. Somewhere in a locked basement in Calgary, Alberta (Jan’s birthplace), is a picture depicting the real age of this motherfucker. The Jan in the picture is beyond old; he’s fucking ancient. He’s lived many lifetimes. I don’t care what devil Jan had to pray to or what kind of sacrifice was made. As long as he continues to play these badass tunes, it’s all good.

Even if you’re not into this classical shtick, you’ll know Mendelssohn. Ever seen a bride walk down an aisle to that shitty song? That’s his. Please, try not to judge him too harshly. Queen Victoria called him the greatest since Mozart and Schumann called him the Mozart of the 19th century. Mendelssohn played piano like a motherfucker, so he wrote difficult piano pieces. He also composed some of the most elegant and romantic shit of all time. So if you want that emotion, drama, intrigue, and all-around holyfuckness? Think Mendelssohn. You’ve got to be dexterous greased lightning on those keys in order to play these tunes. And Jan’s all buttered up, electrified, and backed by the Orpheus Chamber Orchestra.

I’ve read that Jan doesn’t like the child prodigy label (the same label given to Mendelssohn). And I get it. No, the word “prodigy” and I have never crossed paths. If you think of the exact opposite word to prodigy, that’s the shit I got. Prodigy is a word with a magical connotation to it like “genius”. It doesn’t convey the hours of dedication Jan’s put into the craft. It doesn’t show the blood, piss, and spit he’s put into those keys. And honestly? Prodigy doesn’t even describe Jan, because, there are talented fucks everywhere. Nobody knows how many rich piano-playing kids are out there. What makes Jan great isn’t just that shit you attain through practice. He has a depth to the notes he plays. He lives deep within them. Motherfucker shows hella emotion out of those black and whites. So fuck words like talent, genius, or prodigy when it comes to Jan. Dude’s got depth. And if you want a better idea on how he got that, I suggest you buy a flashlight, learn to pick locks, book a flight to Calgary, and talk to an oldass picture.