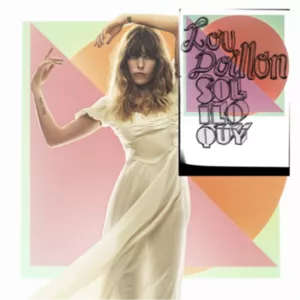 Depending on which landmass your mother decided to shoot you onto, Lou Doillon is a household name. In the parisian world, Lou is a pop princess by birthright. She’s the daughter of Jane Birkin, for fuck’s sake. If you’re not close to the Eiffel Tower and you’re blanking on that name, merde, I feel sorry for you. It’s only Charlotte Gainsbourg’s mother. Huh? You don’t know her? C’est pas possible ! Holy fuck! Gainsbourg?! You know, like Serge Gainsbourg! What?! It’s Serge fucking Gainsbourg! Mais putain ! Lou is also the daughter of Jacques Doillon, but everyone knows of Jacques… You what?! Eh merde, j’abandonne…

Needless to say, Lou was born into a world few of us will ever know. And although there’s a lot of privileges that would come with being born into chic French stardom, there would be a side that’s not so nice. For instance: for the rest of your life, no matter what the fuck you do, you’ll always wonder if you earned one single thing out of your own merit. Are your friends actually friends with you? Do people actually like your music, voice, songwriting, personality, hair, face, walk, jokes, cooking, company, and conversation or is everyone around just a bunch of greedy starfuckers? Worst off? How the fuck would you prove either point? Think about it. You’d never know. That shit sounds pretty lonely to me.

Outside of this Lou continues to make music. This is her third album (Places in 2012 [she won a French grammy for this one] and Lay Low in 2015). And, holy fuck, is this ever fucking good. She’s got a Fiona Apple crack and grunt in her voice that sends shivers down my spine. The production backing her voice is solid. Instrumentation is forward, funky, and imaginative. Her lyrics explore the depths of relationships with a cruel bite that bleeds seduction, power, and vulnerability. There’s even a vocal cameo from Cat Power on this motherfucker.

There’s a lot of bad French press for this album which isn’t too fucking surprising. But, personally, I’ve been waiting a long time for an album like this. It’s honest, fun, fresh, full, not too predictable. And, most importantly, there’s a beating heart at its center. Thing is, depending on your landmass, Lou Doillon is already a household name. So you may judge this album differently. This reminds me of an old joke:

Hey, I could be wrong. Maybe these critiques had nothing to do with Lou’s popularity. Even so, I feel like this album deserves to be heard without a celebrity bias. So, if you didn’t recognize any of those French names at the beginning, c’est peut-être mieux comme ça. Listen to this fucking album. Find out if you like Lou for Lou and not for her mommy and daddy. God knows she’ll appreciate it.