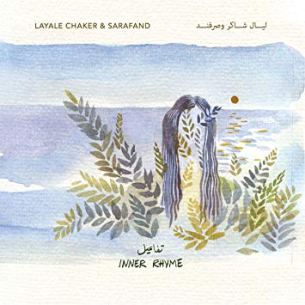 Layale Chaker plays the violin. So, when I say that, what image comes to your mind? Are you thinking of hoity-toity music? Or that modern classical steeze where notes fly from everywhere like some over-pressurized boiler all ready to pop? Or what about when the violin drinks a couple bottles of whisky, throws on its purdyiest smile, and changes its name over to fiddle. That shit’s got more twang than a hillbilly bobbing for the billy goat bills at Billy Hill’s birthday bash. Nonetheless, it’s rare to find someone that thinks of Arabic music. And it’s a fucking problem.

There’s a weird stereotype when it comes to Arabic music. There’s a belief that it can’t change, won’t grow, and it’s stuck in some long-forgotten past. Layale Chaker grew up in Beirut with similar ideals where, with music, you either went left or right, red or blue, East or West, to Brooklyn or Lebanon. So, as she went to study Mozart and Ravel in Eastern Europe, a piece of her stayed behind in Beirut. She did eventually study under an Iraqi violin teacher that made her jam all Arabic styles with badass maqam scales. She used it to let off steam because, let’s get real, the music is pure fire when done right. She was happy with what she learned, but it wasn’t till she met up Vijay motherfucking Iyer in Banff that all the pieces finally came together. The result? This album. This music had to travel through worlds, emotional dimensions, and mental spaces before it worked itself into ears. Or, put more simply, shit’s deep as a motherfucker.

Vijay-jay introduced Layale to a crazy talented bunch of players. They named themselves Sarafand after a depopulated village in Palestine. From here, Layale crafted instrumental songs based on the poetic metres of Arabic political poems. Shit works as thus: she made the poem’s rhyming structure the music’s rhythm. Or, in other words, this music has a count of political fucking outrage. The music is rooted in tradition but has its eyes facing forward. Kinda like being an astronaut with a history major. But’s that’s what shit has to do to in order to survive: adapt. If Mozart didn’t strap rocket boots on his feet, motherfucker would have found himself dead and forgotten. Or, in Layale’s words, “If a tradition is to survive, it has to come out of its box. To witness a contemporary life and a future, it has to be questioned.”

Needless to say, this album is hella unique, personal, and it’s cool as all fuck. You’re not gonna find it anywhere else. It’s Arabic music wrapped in classical and tied up in jazz. Though it dips its toes in all these ponds, it sounds completely natural. It simply is. You could be all up in arms that this shit isn’t perfectly traditional. That’s fine. But while you’re down here bitching I’ll be soaring through space with Layale, Musk, and my motherfucker Mozart.