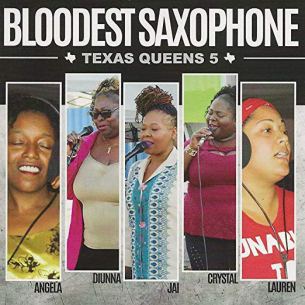 If you like that ’50s R&B, Blues brothers, Ray Charles, horn-pounding kinda shit, then you’ll love this album. You’ve got Houston’s Diunna Greenleaf, Austin’s Angela Miller, Crystal Thomas, Jai Malano, and LA’s Crystal Thomas. These are the members of the Texan Queens 5 and, holy shit, can they sing. No, they don’t sing through a breathy throat to sheepishly express their feelings. They belt that shit hot and bothered. You see that fucking name? This is the Texas Queens 5. They’re big. They’re thick. They’re raw. And, if you don’t like it, you’d better move out the fucking way. In the styles of Big Mama Thorton, Big Maybelle, Aretha Franklin, these ladies sing songs that will either break your heart or break your ass. Either way, they’ll break you.

Backing these incredible ladies is Bloodest Saxophone. A group of early Blues players from Japan. They’ve been playing this music for 20 years and this is their 12th recording. They’re complete pros with names like Koda “Young Corn” Shintaro, Coh “Colonel Sanders”, Shuji “Apple Juice”, The TAKEO “Little Tokyo”, and Kiminori “Dog Boy”, and Osikawa Yukimasa. Every horn shot, each solo, that whirling organ, and surf guitar, it’s all just so fucking perfect. You put on this album and you’re convinced it’s a different era. There are guitar licks so nasty and good, it’s reflective of the great masters.

And look at this set list. With songs like Big Maybelle’s “I’ve Got a Feeling,” Willie Dixon’s “I Just Want to Make Love to You”, Rufus Thomas’s “Walking the Dog,” Dr. John’s “Losing Battle,” and Roscoe Robinson’s “Don’t Move Me No More,” you can’t go wrong. The authenticity is baked right in. There are even a couple of brand new songs on there like the instrumental “Pork Chop Chick” written by Shintaro. Some of these song topics might sound dated initially. But, unfortunately, when it comes to the big shit? Problems always seem to come back around. Take for instance the song “Don’t Hit Me No More”. Sure, you could think it applies to another time. But all it takes is a quick glimpse into any NFL scandal before you find yourself jaw-dropped and thinking, “Wow. How the fuck is this still applicable?”

Look, I know this album isn’t on the top ten hot list of whatever-the-fuck. This album isn’t going to sell cars, tits and ass, or soft drinks. You’re not going to find new progressive sounds on this shit. But there is something to be said for something old done right. If you’re looking for fancy new tastes you’ve never heard before, this isn’t your album. This album is like a good Texan meal. It’s simple. The ingredients aren’t exotic. And, if you had a choice, you wouldn’t want them to be. This is wholesome, delicious, salt of the earth, unrefined, fattening R&B goodness. Chow down.