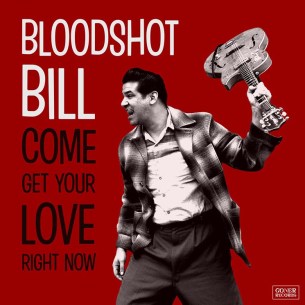 Bloodshot Bill is a gruff, hard-edged, piss n’ vinegared, rockabilly sonuvabitch. He’s been known to play this genre as a one-man band with his one foot next to an opened ended kick drum, sharpied quickly with a “Bloodshot Bill”, and the other foot banging on a high hat. He plays the guitar, or I should say, he embodies the fucking thing. The tone of it transports you to days of blue suede shoes and post WWII rebellion. It screeches with a “Fuck war. Fuck death. It’s time to live again.” This is a reinterpretation of rock ’n’ roll in the days of Charlie Feathers, Carl Perkins, and Hasil Adkins. But this isn’t a fucking copy. Bill embodies the soul of Flat Duo Jets, one of the musical personalities of Tom Waits, and early White Stripes when they still gave a fuck. This is harsh and grimy rock ’n’ roll. The kind of thing that pisses tar, hacks loogies, and is still sexy. This is the world of pomade, slicked backed hair, and packs of cigarettes rolled into the sleeves of white t-shirts. The painter and performance artist Joe Coleman called him, “a cross between Jimmie Rodger and Popey”. Director of the strange movies of Hairspray, Cry-Baby, and Serial Mom called him “Roy Orbison with a head wound.”

Bill started out in the strange town of Montreal back in ’98. Since then, he’s released 30 albums and has toured the world a couple times over. By all signs and accounts, this motherfucker won’t be stopping anytime soon. And with the sounds of this album? I really don’t want him to. In the days where most rock ’n’ roll has turned into a reheated microwaved piles of sex stardom and product placements, listening to Bill feels like breathing for the first time after near drowning in piles of liquefied viscous bullshit. Don’t expect anything clean about Bill. He gruffs out a lo-fi voice that sounds similar to the girl from The Exorcist crossed with the angry bark of Tom Waits. On this album, you’ll be reminded of all those rockabilly sounds of the past. His song “Take me for a Ride” feels like a new version of “Surfin’ Bird” by the Trashmen that’s been beaten half to death by a drinking habit and is, for some reason, trying to hitchhike through Smoker’s Cough, Tennessee. Though I understand the newness of the rockabilly genre is long gone, Bill doesn’t play it to bring back the “good ol’ days”. He interprets the old style in such a different way that’s its become brand new again. This shit is raw. It’s rough. It doesn’t give a fuck. Or, in short, it’s rock ’n’ roll the way it’s supposed to be.

One thought on “Bloodshot Bill – Come Get Your Love Right Now”