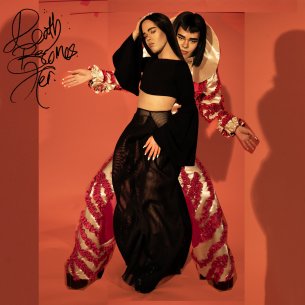 Angel-Ho investigates her transition as a trans-woman by throwing down experimental dance-pop?

If you aren’t already deep into the grooves of artists like Arca or Lotic then you’d better mind your hats going in this album. The sonic roads on this motherfucker go through some bizarre places. At times it can sound like you’re inside an electronic grave or barrelling through echoic mutant tunnels. At other points it can sound like you’re surrounded by dying metallic angels or anthropomorphized viruses cross-country skiing through a computer-parts wasteland. Picture travelling into the future. You find yourself walking down some grimy metropolis street, shuffling through an alley littered with half-cybernetic teens, you go down a long flight of steps into a strange club: this is the music that would be playing. This album is powered by some of the nastiest, freakiest, and most innovative producers in the game. You’ve got Asmara, Gaika, Bon, Baby Caramelle, and Nunu. If you don’t recognize these names, keep in mind that they usually produce the music of what-the-fuck, hells-ya, and holy-fucking-shit-that’s-good. This music is fresh as fuck. And, like it or not, it’s one hell of a ride.

Though this is Angel-Ho’s official debut, she’s released tracks and EPs beforehand (Red Devil). This is her first time singing or rapping on any kind of album. I’ve got to admit, girl can spit. Her lines aren’t made of thick linguistic narratives and they don’t use any highly sophisticated poetic devices. They’re simple, informative, and direct. Considering the pure cacophonous devil-worshiping beats flying around like pieces of flying debris, it’s better this way. This album pushes what pop, dance, and electronic music can be. It’s daring enough to be different. It’s defiant in a whole new way.

On a first listen, this album may seem disordered. But that’s what happens when there are so many new ideas are once. After all the dust settles and the novelty wears off, the theme reveals itself. At the core, this is a story of identity. And, like so much great music has done before, the album forges and carves out a place where this identity can live, love, and create with absolute freedom. This is an album which, in more ways than one, steps out into the world and says, “This is me you sons of bitches!” And I’ll I’ve got to say is: Fucking. Aye.

One thought on “Angel-Ho – Death Becomes Her”