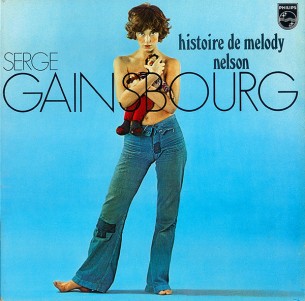 How the fuck was this released in 1971? It doesn’t make sense. This isn’t an album that goes in the “good for its time” bin. It’s just fucking good.

You don’t need to speak a word of French to know what the fuck is going on here. That jean-wearing pregnant (!) nymphet on the cover is Jane Birkin. She would later place that cuddly toy into Gainsbourg’s coffin. Serge only got into the rock game in his 40s. Dude bounced fucking everywhere in the genre game. But, one thing stayed the same, motherfucker was controversial. He had already written songs for teens to sing that were all about enjoying lollipops, like, reeeeally enjoying them, almost gagging on those motherfuckers. The double meaning was not lost on the public. He got a public denunciation from the Vatican itself for his song “Je t’aime… moi non plus” which has the sound of an uncomfortably long female orgasm in it. How does Gainsbourg respond? He called the Pope “our greatest PR man”. This song was also banned in Spain, Sweden, Brazil, The UK, Italy, Portugal, and anywhere in France before 11 p.m. Now that’s controversy. Someone once asked him what he does for exercise. His answer? “I fuck.” Gainsbourg didn’t care. It was his thing. So the fact that this album is about an old man hitting a teen on her bike with is Rolls, then hooking up with that teen, and then having that teen die in a plane crash, is Gainsbourg to the core.

You might rightly cringe at this concept, but look at how much early rock ’n’ roll was about teen love affairs? And this shit wasn’t just metaphorical. Jerry Lee Lewis married his 13-year-old cousin. Elvis was dating Priscilla when she was 14. All those “sweet-sixteen” songs? That shit isn’t/wasn’t legal. Look, I’m not trying to make this shit okay. But that mid-20-something on the cover? That’s hardly controversial, even to our modern-day standards. Gainsbourg just plays the role of lustful old man with such utter conviction you want to either hate him or fuck him. Motherfucker could make a dried noodle squirm.

There are so many elements that make this album perfect: those tight groovy musicians (Vic Flick, Big Jim Sullivan, and Herbie Flowers), the amazing orchestration (Jean-Claude Vannier basically co-wrote this album), the influence it would have on Trip-Hop, Hip-Hop, Folk (Beck basically ripped off this album for his ’02 song “Paper Tiger”), the melody bookending of the bass on the tracks “Melody” and “Cargo Culte”. But even after saying all of this, the beauty of this album still doesn’t come across. When something’s this good, words just don’t matter. You just put it on, sit back, and balk at the ever progressiveness and perfection which is “Histoire de Melody Nelson”.

I bring this album up for a certain reason. If you haven’t had your eyes on the album’s run time of late, popular albums are getting way fucking shorter. Sure, you may still get the odd hour-long album release, but they’re the exceptions. I’ve heard people moan and complain about this subject like weary cows with over-plumped tits. They blame the album’s shortening on the post-CD economically driven mentality. Maybe it’s true. Maybe artists are milking the shit out of us for profit. Why would you need to sell a litre when you can sell the pint for just as much? But fuck that cynical bullshit. If you hear some lonely heifer loudly baying about the economic reasons for albums getting shorter, direct their maw toward this perfect fucking album with a run time of 28 fucking minutes. This is proof that albums aren’t getting shorter, they’re just becoming better realized. Without the fixed time set, like with the record or the CD, an album finishes when it fucking wants to. It finishes when that idea is done.