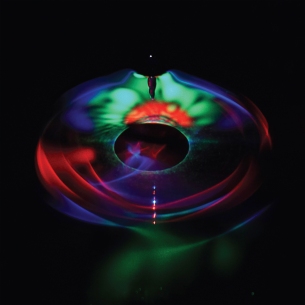 A black hole is what happens when a star is so fucking fat the heat and pressure at its core creates iron. The iron centre builds inside this Fatty McFatfat, while increasing the gravity, so much that the core collapses and everything just fucking implodes. Now that’s a big bitch. If you were to slowly approach one of these black holes, time itself would slow down. If someone were looking at you as you approached, to them it would you look like you were going in hella slow motion. From your perspective? Shit would be going crazy fast. You’d watch the universe age hundreds of years in seconds. These mega bitches also make a sound. Say what? Ya, the closest thing we have to a god has a voice. In 2003, badass scientists recorded a black hole and got the deepest note ever detected by any object in the universe. Shit was so deep we couldn’t even fucking hear it. Now, how does it sound when two black holes morph into a single monster thunder fucker?

Welcome to the goddamn album.

In a lot of circles, Basinski needs no introduction. The recording of his decaying tapes, Disintegration Loops, is the symbolic soundtrack for 9/11. His albums are about big subjects. How big? Black hole kinda big. Sounds on this album were recorded by LIGO (the Laser Interferometer Gravitational-Wave Observatory) over at CalTech. There they recorded the sound of two black holes colliding 1.3 billion years ago. Did you get that? This album has been 1.3 billion years in the fucking making. Now that’s the most OG shit I’ve ever fucking heard.

This album was developed to accompany the Berlin art exhibition “ER=EPR” and “Orbihedron” by the artists Evelina Domnitch and Dmitry Gelfand. The last track is even called “4(E+D)4(ER=EPR)”. Which, cool. But what the fuck does it mean?

Time to get motherfucking physic-ed.

ER=EPR is not some standard type shit. It could be a basis for general relativity, quantum mechanics, and a theory of fucking everything. So, it’s not entirely easy to explain. The symbol ER comes from the first letter of some surnames you might have heard before, Nathan Rosen and Albert fucking Einstein, back when they wrote about wormholes. EPR refers to quantum entanglement or the EPR paradox, which is when motherfucking black holes get fucking entangled. Therefore, ER=EPR means that a wormhole (ER) is equivalent (=) to some clusterfucked black holes (EPR).

Stop doing the learning and onto the motherfucking album already!

For the sound of two black holes sucking face, this album is surprisingly quiet. There’s a bunch of shit that isn’t discussed by Basinski about this album. First off? Black holes generally encircle each other for centuries but take less than a second to collide. So what sound are we listening to? I have no fucking clue. But, like most Basinski albums, this one provides the perfect soundscape to contemplate a given subject. The subjects suggested here? Space, time, entropy, and motherfucking cosmic oblivion. You know, the simple shit. Listening to this album creates the same feeling as looking into the stars and realizing just how insignificant we all are. At times this shit is kinda freaky. But, most of the time, it’s completely fucking awe inspiring. Need a soundtrack for the optimism that spurs from the existential crisis birthed from the understanding of how precious and random our existence is in the face of shit like black holes? Wow, that’s a highly specific request, but okay. Here is your motherfucking album.