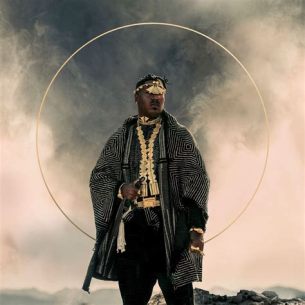 You want jazz so rooted that it comes off sounding like hip hop?! This is that kind of jazz. You’ve even got Saul Williams on this motherfucker.

Time to buckle up, motherfuckers.

If I were to tell you that a rapper threw down a cameo on a jazz album, you’d think it would stick out like a sore thumb up someone’s bum. Shit like this is still considered edgy, in lots of parts of the jazz world anyway. But for those who know Christian, fucking up these preconceptions about music, sound, and culture isn’t all that surprising. It’s what the dude does. Dude won the Edison Award twice and has been nominated for a Grammy twice. Back in ’17, he pulled out his “The Centennial Trilogy” which was three albums created to celebrate the 100th anniversary of recorded jazz. Not only was this shit good, it changed the game. If you hear a trumpet, a cornet, a flugelhorn, or a soprano trombone on this album, that’s Christian. Not only can the dude play, he can conceptualize alongside the greatest that have ever kissed that vibrating brass ring.

So, what’s Christian up to here? Unity. Plain and simple. He does this by, musically, going back in time to a place before we defined things into these tight and restricting genres, back to a place where the only thing that mattered was a solid beat and that red flowing blood. Somewhere in our fucked up history, music that emphasized harmony was considered sophisticated and music that emphasized rhythm wasn’t. Same shit happened with words. Check it: why is the word fuck such a bad-bad-no-no and fornicate, commerce, intercourse, and coupling aren’t? This is because “Fuck” is German-based and all those other words are Latin based. Excrement, faeces, excreta, and shit? Latin, Latin, Latin, Geeeerrr-manic! You can do this throughout all English language. Smart sounding motherfuckers use Latin-based words. It’s a little trick they do to fuck with the rest of us. See, if I were to pontificate exclusively in specified locution etymologically established within Latin, it would resemble this type of language. If I speak in Germanic- (or Greek-) based words I sound like this. Latin/Everythingelse. Melody/Rhythm. Rich/poor. You see how this shit works? It’s fucking sound oppression.

Christian takes the snob out of jazz by focusing on rhythm. The end result is jazz that sounds natural. Reeeal natural. Straight from the vine, the tit, and the horse’s mouth. It’s unbleached, raw, chemical-free, organic, pure, and wholesome as all fuck. It’s jazz so rooted, stable, and set into the earth, that I’m going to have to hang a tire swing off of it. It’s difficult not to like art that takes off its evening gown and just hangs out. Fuck sounding intelligent: just be intelligent.