Now that’s good fucking classical. Great players can sometimes feel like a dime a dozen. But you’ll be hard pressed to find another 2019 classical album with this level or creativity, talent, heart, with a giant set of hairy swinging balls and iron ovaries braving this innovation as hard as these motherfuckers. On this album you’ve got a trio made up of Julia Fredersdorff (baroque violin), Donald Nicolson (harpsichord and organ), and Laura Vaughan (viola da gamba and lirone). With only three players, this shit is bound to be minimal. But they play to their strengths by picking pieces that can be torn down to their bare minimum and still sound as fresh as a baby’s fart in a tulip field. There are a handful of traditional songs on this shit that sound perfectly in place, which makes sense considering that they’re playing traditional fucking instruments. But what really sets this album apart is when they play the “new” shit. If you can only listen to one song from this album, take a peek at their version of Erik Satie’s “Gnossienne No. 3”. I’ve heard this shit more than Nirvana has smelt teen spirit. But with how they played this song, it was like listening to it for the first time. Think about that for a second, modern songs made new and enjoyable because they were played with old school instruments? When that kind of magical musical fuckery actually works, you know the album is good.

Mazal comes from a Japanese word which means a mix, a ragbag, an olio, or a clusterfuck. But why would someone call their album a mixture? First of all, a “mix” or “mixtape” is a legendary word in the rap game. It comes from its history of bootleg tapes of early rap groups. There’s that long list of modern rappers (Drake, Chance, Dave East, ASAP Ferg) releasing “mixtapes” instead of “albums”. Why? Expectations, motherfucker. You in the mood for a film or a movie? Being naked or nude? Wanna grab some grub or venture over to a prandial affair? But, even then, I don’t think that’s why these motherfuckers called this album Mazal. This is YUNGMORPHEUS and Fumitake Tamura’s first time working together. And while some MCs and DJs fit together like puzzle pieces, these two stir together and create one single element. These two are the single fucking mixture. Their style is laid-back and trippy as fuck. This is a great album to listen to when extremely high. Like, really high. Like, “holy fuck, why is that aardvark giving birth to mini Hendrixes”. These sound waves live in a giant pot cloud. It doesn’t mean that these lyrics aren’t dense or meaningful. Fuck no. Like any good trip these songs tackle the deepest of terrains like paranoia and racism, but it won’t drag you down into the muck. These lo-fi chill beats give the messages a beanbag platform. They come to you as a friend passing a perfectly rolled joint instead of spitting at you from a podium. The trippy off-kilter beats give a new angle to these words. So sit down, pull up a chair, take a toke, and listen to some chill folks wax poetic about modern issues.

Martin Hayes plays the shit out of Irish traditional music. He might very well be the best there’s ever been. Dude’s straight boss. He strings that hollow wooden box like that motherfucker owes him money. He’s performed with Bill Frisell, Sting, Paul Simon, and Yo Yo fucking Ma. And there’s a reason why Martin gets all this cred and acclaim. Each note he bows and plucks is infused with intent, interpretation, impish instinct, and enough intellect to get that ticker tocking without knocking you broadside. Guy takes the yawn out of traditional. On this album he plays with Brooklyn Rider, a crazy good string quartet. These arrangements backing Martin’s soloing are sophisticated as fuck. Beethoven would be nodding along happily to what these Brooklyn Riders are throwing down. Lots of traditional music comes off flatter than a wooden board being carried by a pre-teen across the Bonneville Salt Flats. Not here. This shit is boisterous without being overbearing. It’s got an ardent ardour. It’ll get you romancing, dancing, laughing, prancing, and entrance you without the use of drugs or drink. Best digested over time, and through many listens, this is an album that will further prove that Martin is the living legend that he is. Picture perfect from start to finish, this shit’s a goddamn classic for Irish traditional tunes. 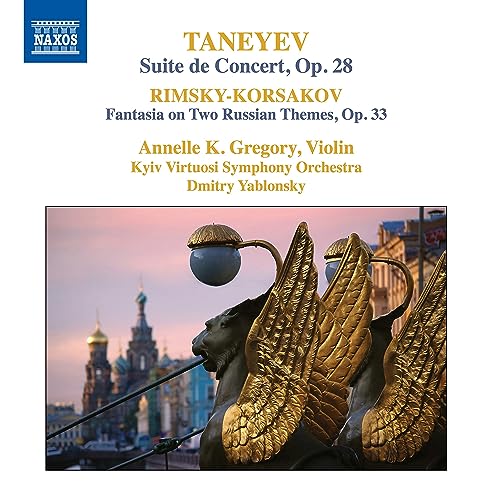 This shit got me smiling like a moron. It brought out a childishness in me. I felt like frolicking through a fucking field of poppies. I repeatedly had to pick my jaw up off the floor due to Annelle’s vivacious violin playing. Make no mistakes, this girl can play. Annelle is one of these up and comers that make the tried and true pick up their slack. She’s got a list of awards longer than your fucking arm. And it doesn’t look like she’s letting up anytime soon. The Kiev Virtuosi Syphony Orchestra backs up her game straight gangsta. As she articulates and builds, the backing orchestra moves with her like a tail. When she mellows, and makes that shit cry like a bitch, the orchestra follows her nuances in perfect pitch. These two work like a single mind. Not easy to do. Something tells me that glorious Dmitry Yablonsky probably had something to do with this. Dude could conduct a lightning storm. Pretty sure he takes his inspiration from Moses when he parted the Red Sea. When it comes to monolithic productions like this that take droves of personnel and professionalism, they often fall flat due to one apple ruining the batch. Sometimes the player is boss but the orchestra is sleepy, or everyone’s on their A-game but the conductor’s half drunk. Everyone steps up on this album. It’s clean. It’s crisp. It’s just plain fucking good. So if you’re in the mood to listen to some dope ass symphonic classical, this is your jam.