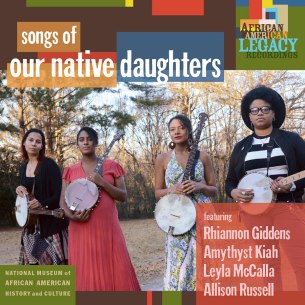 Nine times out of ten one of the greatest ways of making a party awkward as fuck is to bring up the subject of slavery. And I mean really bring that shit up not, “Ya! Slavery was totally the worst!” kinda conversation, but really get into the nit and gritty of it. From what I can tell, this is the conversational equivalent of taking a shit on the floor. You can do it. Sure, it might even provide some relief. But nobody within your vicinity will ever invite you to another party. Plus, you’ll forever be labelled as the person that went up, pulled trou, and make everyone feel hella awkward. And nobody wants the label of “party pooper”.

Rhiannon Giddens sings bluegrass, wins genius awards, and is an all-around badass. She’s invited Allison Russell, Amythyst Kiah, and Leyla McCalla to join her to make this album. So, what’s it about? That super easy to digest subject matter of how slavery affected women, also known as “party jams”. Thing is, this album does something that you may not expect. It’s not awkward. Like, at all. Sure, it’s informative as fuck. But it’s not full of itself. It doesn’t pride itself in being the teacher of correct morals. It lures you in with its fantastic banjo jams and harmonies then says, “Don’t worry! We all have our own privileges. We all have our shit. Join us and see what we can do together to make the world better.” For instance: the song “Barbados” starts with a poem from the perspective of a mother that feels bad for the slaves she sees but, “how can we do without sugar or rum?” You listen to it, feel superior, and think, “the world was so fucked then. Imagine, putting humans into chains for some fucking sugar.” But the song ends with another poem. This poem about a modern mother that feels bad when she reads about people dying in mines and children sewing clothes. She says, “but we give up our tablets, laptops, and phones?” All of a sudden, you don’t feel so superior. None of us are blameless.

Somewhere along the way, people got sensitive as fuck. The world started to relate to their Facebook profiles and tried and live these super smiley and blameless existences. We log onto whatever social media is out there and throw shit on whoever we think is garbage that day. We chirp, tweet, and point fingers. But it’s more difficult to turn that finger in on yourself. But nobody’s fucking blameless. And the only way to change shit is to talk about it, or if you happen to be an incredibly talented group, you sing about it in four part harmony executed with the precision of a skilled archer. Delivered on the vehicle of soul fulfilling bluegrass these messages, though weighty, go down smoothly. It’s real, raw, and comfy. It’s like have an incredibly honest, revealing, and (dare I say it) fun conversation about the effects of slavery on women. Best part? Nobody’s labelled as the party pooper because everyone’s got shit.