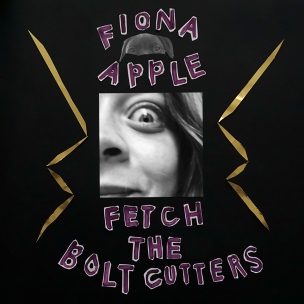 If you’ve been following this shit legit, you know I’m generally not a fan of critics. But the motherfuckers got it right this time.

Am I surprised Fiona Apple released a jam of an album? Fuck no. It’s Fiona fucking Apple. Am I surprised how good this album is? You bet your fucking ass I am.

Each aspect of this album is tuned in. So many variables diligently thought out. It’s like a thousand little gears inside a crooked clock whose face turns a nefarious yet beautiful smile. At this point in her career, Fiona could’ve called it in. Many have, many do, and many will. By the time expert and beloved musicians release their 5th album they tend to relax, calm down, watch the goddamn prairie skies like a dog on a fucking porch catching sun. But not Fiona fucking Apple. “Kick me under the table all you want. I won’t shut up,” one of her choruses screams. Fiona Apple isn’t sleeping on the porch, she’s the thing that lives underneath that’s been watching and plotting for eight loooong years. She’s been kicked, bruised, burned, spat on, and fucked. Now she’s about to burn this motherfucker down and give everyone rabies. She isn’t cleaner, more sewn up, or proper. The world told her she’ll look prettier if she smiles, so she bit its fucking throat, foamed at the mouth, and smiled as its blood ran down her cheeks. Her honesty stings and rectifies. Fiona Apple is the burn that cauterizes the wound.

Lyrically, it’s full of heart-wrenching gut punches that’ll get you contemplative and cackling. Production-wise, it’s rough, raw, forward, and perfectly mixed. Instrumentally it’s experimental, expertly played, and daring. The drums on this shit work like the album’s heartbeat. Fetch the Bolt Cutters is hugely liberating (get it?) in so many ways. It’s a goddamn masterpiece and her best album to date. And that’s saying something considering how good she fucking is. This album screams out at a rigged world and the standards it has set for both men and women. Fuck men for being stoic. Fuck women for hating each other. And fuck all of us for keeping it this way. Fuck the world for making me feel alone and insecure. And fuck me for only posting my best angles! Fuck love. Fuck pain. Let’s change the game. Let’s burn the farm. Fetch those fucking bolt cutters cause it’s time to burn down this bitch.